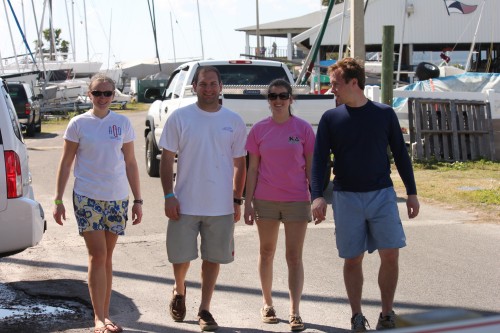 We arrived at Davis Island Yacht Club on Saturday morning hoping to get in our first day of sailing. The wind was up around 15-18 knots when we arrived and white caps were beginning to appear. By the time we got the boats launched the wind was sustained 18-20.

This was my first time helming a Front Runner and we headed out to the course with the rest of the fleet. A few boats who had gone out ahead of us, passed us going the other way, and I just figured they were doing some upwind practice. Once we made it to the starting area we quickly realized we weren’t going to be able to compete in this wind, and having only been in the boat once before, it was probably going to be best for us not to remain out long. So we headed back for the dock.

Turns out we had good company. The boats I thought were practicing were already rafted up and within 2 minutes we were joined by another boat making 4 out of the 10 boats already at the dock. After we tied up, we went up to the deck at the yacht club where we had a great view of the race course. We watched the carnage as boats were towed back in. The crash boat at DIYC did a great job recovering boats and getting back to the club.

One boat in our group ended up nearly sinking and it ultimately took us 2 hours to drain. 3 boats ended up getting in 3 races. The rest of us hung around the club in the sun and put the boats away for the night.

Tomorrow the forecast is for a little less wind. If it’s the right strength then we’ll make a go of it, otherwise if it ends up being too much, we’ll probably leave a boat behind and triple up on a couple boats.