The second day of racing at Key West Race Week was a little warmer and had a little lighter wind than yesterday.  We had a great start in the first race.  Unfortunately, it was too great and the race committee called nearly half the fleet over early including boats that were above us and below us.  We realized we were over immediately and were able to bail out and get restarted without loosing a lot of ground.  With so many boats being called over meant many of the leaders were at the back of the pack right at the start.

The lighter wind we today than yesterday meant the racing was a lot more about being in the right spot.  Our boat handling was a lot cleaner and we did a good job getting around the marks without getting into any drama with other boats.  We managed a 6th in the first race.

The second race was light and lumpy which required much better technique going up wind to keep the boat moving.  We were in the lead pack up the first beat, but fell off on the next two legs and ended up 6th when the race was shortened down to 3 laps from the 5 that were planned because of the dying wind. 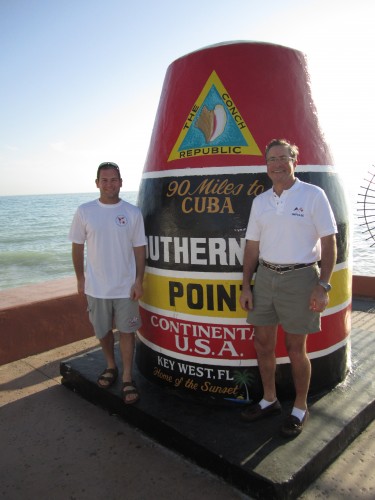 After racing we packed up the boat and headed back to the Condo.  Lud and I went for a bike tour of the western part of the island and rode by places like the Hemmingway House and the Southern Most Point.  Later we all stopped by the regatta party to see the awards given. Following the party we went to the Rum Barrel restaurant and had a nice dinner with some live music.

Tomorrow’s forecast is for less wind than today.  We were reminded numerous times while at the party to listen to the 8:30 and 9am announcements to find out if we will be postponed on shore.  Tomorrow could be a good day to be a tourist.