Friday was the final day of the Laser North American Championship at Brant Beach Yacht Club.  We went out for a 10:30 start in what we knew would be a dying breeze.  After one general recall I got a pretty good start in the middle of the line.  I was in the top 20 around the first mark and held that to the downwind where I lost a few spots.  On the second upwind I headed way out to the right, through the Radial Silver fleet that had just started, and found a lot better pressure putting me into the top 10 around that mark.  On the final downwind and reach the wind died and a light sea breeze came in.  I didn’t get far enough out to an edge and those who did were able to get around me.  I finished 26 and that ended up being the only race of the day.

All in all it was a great week of sailing and I was able to learn some things and show myself that I’ve got what it takes to at least be a competitor in a regatta like this.  Winning a race completed the week and was the highlight of my sailing year.  I’ve got 3 annual regattas planned for the next 4 weekends and I’m looking forward to the smaller fleets and fun times that go with them. 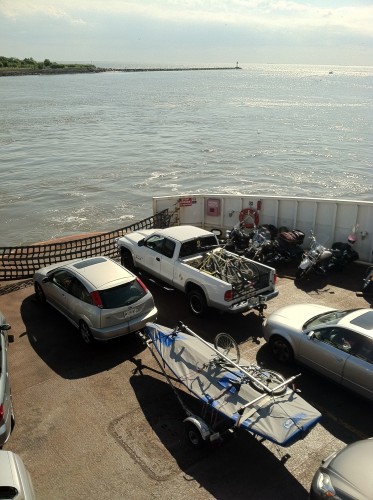 Today started out with winds over 20 and gusts even higher.  I sailed out to the course, but sailed right back in.  With self-preservation in mind I was too afraid of one bad capsize and re-injuring my wrist and missing more sailing, so I thought it would be best to sit these conditions out.

I spent the day going for a run and catching up on some reading and email. I missed 3 races, but there 2 more left for tomorrow.

We sailed 3 more races at the Laser North American Championship today after a 2 1/2 hour postponement on the water.  I won the second race of the day.  During the first race – in which I only beat 4 boats – I figured out the wind/weather pattern and used that to my advantage in the second race.  There were some dark clouds out to the left of the course and everyone was fighting for the pin and going left.  I knew by the pattern a righty was coming and was very close to the boat end at the start and immediately went right.

The righty started coming in and before I knew it I was on the lay line.  After I tacked it was pretty clear the fleet was well below me, but I wasn’t sure if it was going to go left and bring them back.  At the windward mark I had about a 20-boat lead.

It was great being all by myself up front because that meant I could sail the rhumb line and fast.  It felt like a 10-boat regatta where all I needed to do was not make any mistakes, go fast, and pay attention to the wind for any shifts.  I extended my lead on the next 3 legs and had close to a 40-boat length lead, on the boats behind me, after the second upwind.  By the last downwind the fast guys, like regatta leader Clay Johnson, had gotten back up to the front of the fleet and started to close in on me.

On the final upwind leg to the finish a rivet popped out of my gooseneck and fell to the deck.  I just kept racing and crossed the finish in first.  It was a relief I made it without falling apart or being caught and it was a thrill to win a race like that against such great competition.

As soon as I finished I set to work jury rigging my gooseneck to get me through the next race.  In the 3rd race I played the shifts pretty well and kept myself in the front part of the pack putting me in 29th for the race.

I’m currently in 39th with 6 races down and 5 races to go.  If I can finish half as well as I did in the second race today I should be able to stay in the top 40 and pick up some grand prix points.

Today was the first day of the Laser North American Championship Regatta at Brant Beach Yacht Club.  A few weeks ago I banged up my wrist so I had taken the last two weekends off from sailing other than just going out as ballast.  Yesterday and today were my first two days back out on my wrist.

We were racing with 70 Lasers in one start.  In the first race I had a pretty terrible start and took pretty much the entire race to get my wheels going and get back in the groove.  I finished in the 50’s.

On each start we had numerous general recalls and every start was ultimately under I over Z.  On the second race my tiller universal joint snapped right at the start.  I ended up spotting the fleet two minutes while I made a repair.  I managed to come back and wasn’t even DFL at the first windward mark.  I picked off boats on every leg and wound up 45th.

In the 3rd race I had a reasonable start, hung with the bulk of the fleet and mostly held my position to the finish ending up 44th.

Not my best day on the water, but reasonable given the level of competition.  My wrist held up and hopefully won’t be giving me any problems this week. With a little less wind forecasted  for tomorrow, I should have a better shot at keeping the boat flat and staying in the fleet.

This week the Laser North American Championship is getting underway at Brant Beach Yacht Club. I drove in yesterday evening and got the boat ready today and went for a short practice sail in 15+.  I’ll be sailing in the Standard Rig fleet with about 72 boats.  Another 142 boats will be sailing in the Radial fleet. 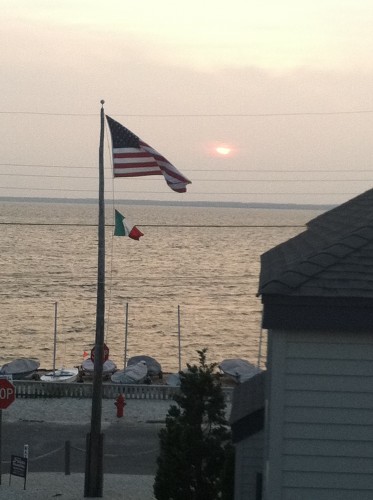