The 2016 edition of the Laser Atlantic Coast Championship was held in beautiful Bellport, New York at Bellport Yacht Club.  As usually navigating the van up 95 and through New York City is always a challenge and I somehow found myself on surface streets among the taxi cabs before re-finding the expressways.

The racing started Saturday morning right off the dock of the club with 29 boats in the standard class.  Having not been in a Laser since Easter and back to sailing the original MkI sail I found myself a bit off speed in the moderate winds and chop.  The highlight was the race I rounded the first mark in the top 5, but would fall from there picking the wrong side on the 2nd beat.  I finished 17-20-16-23 and found myself in 18th after the first day.

Sunday the weather called for much higher winds.  When the RC didn’t immediately take us out on time and postponed us due to the wind conditions – I decided I wasn’t going to be in the kind of shape or practiced enough to make a respectable showing in those conditions and got on the road home.  Quite a few others did the same.  Eventually the RC took the fleet out for 2 more races. The 2nd day of the Laser Atlantic Coast Championship started out early and started with no wind.  We had a 0930 first warning and they sent us out – towed most of us out to where we sat for 2 hours.  By 11 the wind started coming in from the south and built from there.  The Standard rigs got 3 more races in, 2 for the other fleets.  By the 3rd race we had solid hiking conditions.

I had a tough day.  I didn’t start well and the short first beat meant everyone went around the first 3 legs in a clump.  The 2nd beat was always where I made my gains picking out the shifts upwind and picking off 10+ boats to get me back closer to the middle of the fleet.  Thanks again to Little Egg Harbor Yacht Club for putting on  a good regatta and I had a great time meeting new people and seeing friends. Quite a day for the first day of the 2013 Laser Atlantic Coast Championship at Little Egg Harbor Yacht Club on Long Beach Island NJ.  Looking at the scores – everyone was up and down  and very inconsistent.  We had 4 races with 4 very different conditions for each.

In the first race I had a poor start, but picked my way into mid fleet.  Right at the end I tapped someone at a mark rounding and had to do turns.  Finished 41. By the second race we had 6-8 knots of breeze.  I picked out the pin end to start and nobody was down there.  I won the pin and just punched out and kept going out to the left and stayed out front.  By the top mark only Eric Reitinger was just ahead of me.  On the downwind a couple boats caught me and on the 2nd upwind I found a hole and lost 10 boats.  I held there and finished 15. In the 3rd race we started under black flag and had what I thought was a great spot, but suddenly I found myself bow out, chickened out and backwinded so I didn’t get black flagged.  As we went upwind the wind continued to die and it started to rain.  That continued throughout the race and by the last leg we were barely going along and I finished deep.

In the last race the wind came up to 9-11 with clear skies and I had another terrible start.  I immediately tacked out and got bounced further to the right and found myself on the layline at the mark about 25th.  Both downwinds I went way right mostly just to stay away from the other sailors and picked up a spot or two on each.  On the 2nd upwind we had a course change with the wind shifting.  I picked the phase perfectly and picked up at least 10 spots upwind.  Finished 13th.

All in all it was a tough day but still a lot of fun and I’m looking forward to day 2 tomorrow.  Keep an eye on Twitter on @LaserACC for my updates. Sunday just wasn’t my day. I sailed out to the course, but knew it was going to be a rough day for me.  Overpowered with big waves and not feeling so great so I headed back in.

Here’s some video from Saturday:

First day of the Laser Atlantic Coast Championship at Carolina Yacht Club in Wrightsville Beach NC.   I was on the fence and decided to go with the standard rig.  We had mostly clear skies with 10-14 knots of wind.  The first race started around 11:45  and I had a good start out to the left.  On the very first tack of the very first leg of the first race my vang broke.  I’m not sure if I just didn’t have the pin in all the way or what happened, but I spent two minutes getting that straight and being DFL at the first mark.  I made up a little over 5 boats and ended up 37 out of 45 boats.

In the second race I had a great start and was able to hold my lane most of the way up the first beat. I hung with the main pack and managed a 26th place finish. In the 3rd and 4th races the wind calmed down a bit and the lumpy sea state made it tough to maintain boat speed. I was well into the 30’s boat races putting me in 33rd for the regatta.

After racing I cleaned up and put away the boat. We ate the regatta dinner and then hit downtown Wilmington with the Annapolis crowd.

After a half day of work and an afternoon drive to Wrightsville Beach North Carolina I’m at Carolina Yacht Club for the Laser Atlantic Coast Championship this weekend.  It looks like we’re going to have some beautiful weather with warm conditions and mostly sun.  That also means the wind could be a little light at times. 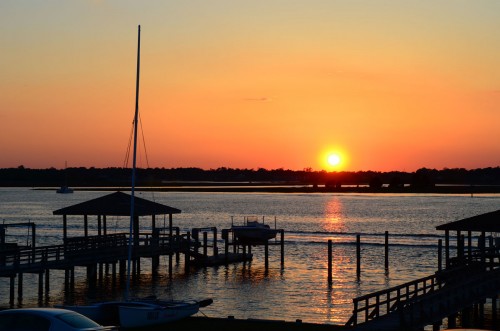 This evening I hung out with the SSA crowd who have a house a couple blocks down from the club.  We had a lasagna dinner and watched the sunset.  Approximately 16 sailors from District 11 have made the trip down.  We’ve all got D11 pinnies so we should be easy to spot. 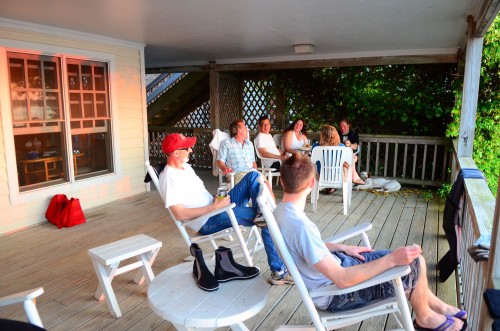 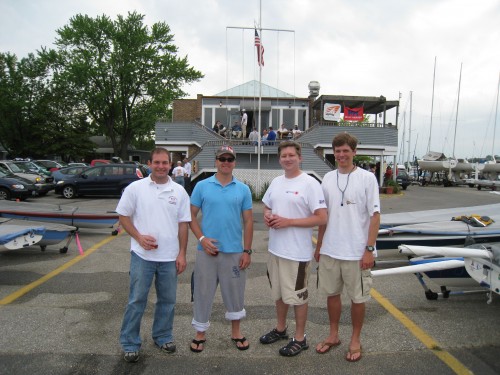 The first weekend of May was the 2009 Laser Atlantic Coast Championship (standard rig). 84 Lasers sailed in a variety conditions for two days in Annapolis, Maryland. Results are here. Off-the-water photos are here.

By jon Posted on May 5, 2009 Posted in Life, Sailboat Racing No Comments Tagged with Annapolis, Backspace, ILCA, Laser ACC, SSA