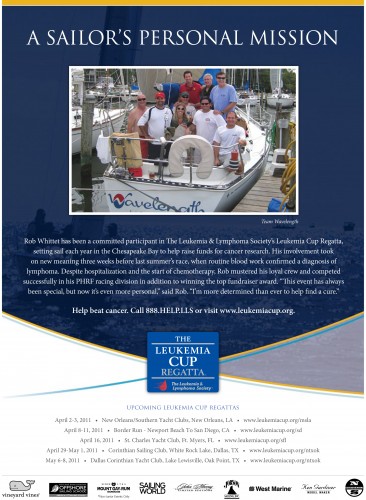 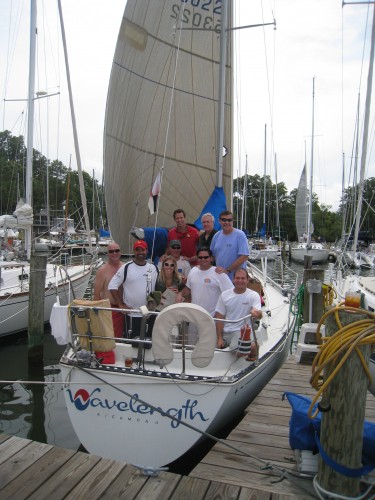 Last weekend was the 2010 Leukemia Cup Regatta. It was held in Deltaville at Stingray Point Marina/Fishing Bay Yacht Club. Above is a photo of the crew. After abandoning the first race on Saturday in a lightning storm, we only managed 1 race on Sunday before the wind let out. We finished 4th in our 7-boat fleet. We might not have gotten any hardware on the race course, but we were the top fundraiser raising over $11,000 to support cancer research.

This weekend I was at the 2009 Southern Bay Leukemia Cup Regatta in Deltaville, VA sailing about Wavelength in the PHRF-A fleet. Last year I took photos and did a regular video.

This year my experiment was to take and collect photos from the event and immediately post them to twitter via the Fishing Bay Yacht Club twitter account (@fishingbayyc). I had a couple people emailing me photos from their camera phones throughout the event. During every free moment I had while racing, I would download the pictures, edit them, and tweet/post them to twitter/flickr. Having image editing apps on the iPhone made this work so easily. The only downside was the spotty coverage out in the middle of the bay, so downloading/uploading went slow.

All and all it was a fun experiment. I want to thank Goeff Cahill, Gary Hooper, and Scott Turpin for contributing photos to the video. The event website including results can be found here.

I am making my directing and producing debut with a highlight video of the 2008 Leukemia Cup Regatta at FBYC. I used my Canon SD870IS to take a bunch of short clips of the regatta, party and awards.

I also have some photos that are posted here.