Annual race at Fishing Bay Yacht Club for small boats 25′ waterline or less held on July 4th weekend, sailed near the mouth of the Piankatank and scored using the Portsmouth handicap system.

We had a super day for the FBYC One Design Long Distance Race. I was sailing an ILCA, one of 3 in the race, including one that sailed off a beach in Mathews to join us, against 10 other boats ranging from Melges 15s to Flying Scots to a Front Runner and a Rocket.

We started in Godfrey Bay and did a short leg upwind to #12 in the Piankatank in 8 knots out of the ENE. The first mark could be fetched from the start, but just barely so a boat end start was critical. I was a few seconds late following a Melges 15 who was a little early and bore off leaving a nice hole for me to start. Another ILCA was behind me and behind them was a Flying Scot.

Upwind I tried to hold my line and make the Flying Scot go around me. I ended up rounding 3rd as we headed east on an almost upwind angle to Piankatank #8. As we passed Stove Point the clear fetch enabled the wind to build to the low teens. My decision not to wear hiking pants didn’t seem so wise. The Front Runner passed me on this leg leaving me in 4th as we went nearly upwind again to FBYC-B just off Stove Point. Thus far everything has been almost upwind and I was in 5th as we turned to go back.

The course in reverse was still a lot of reaching making it hard for the symmetrical boats to fly their chutes and even the asymmetrical spinnaker boats weren’t able to fly their chutes all of the way back. It was great reaching conditions for the ILCA and I was able to reel in the Front Runner and the Flying Scot on the long leg back to 12. Eventually 1 Melges 15 got around me and I was the 4th boat over the line behind 3 Melges 15s and corrected to 3rd overall.

Thanks to Lew and his team for running our races and congrats to Walker on a well sailed race.

This year Jess and I sailed lasers in the FBYC One Design Division Long Distance Race. All of the smaller boats <24′ waterline sail using the Portsmouth handicap system in a race that covers a total of 7-8 miles in the Piankatank River.

We had a variety of boats in the fleet from Lasers, Radials, Flying Scots, a Weta and a few J70’s. The 70s would be fast and the off-angle sailing under asymmetrical spinnakers would really give them a chance to pull away.

The start set the boats off on port tack eastward down the river. The rest of the fleet all came barging in on port tack at the pin and I did a starboard dip line start and forced all of them to give me room and Nostalgia had to circle around and restart. The J70 Billy Buff started just behind me and I was able to pinch them off and slow them down before they eventually went under and around me.

The wind held at a steady 9-11 knots out of the north east. The course took us towards Gywnn’s island, around #8 and then towards the entrance to Jackson creek. It then doubled back and then went ~3 miles west up the river and then back to Godfrey Bay.

I kept up best I could with the Flying Scots and stayed ahead of the Weta while the J/70’s sailed pretty far into the distance.

Following racing as we were packing up the boat the scorer walked by and let me know that after the handicaps were computed, I tied for 3rd with Billy Buff and we both beat Nostalgia by 2 seconds. Just goes to show that starting on starboard made a difference between 3rd and 5th.

For FBYC’s Long Distance Race Jess and I took out the snipe. After not being able to finish the Open House Regatta earlier this year, we were excited to hold everything together and have a respectable mid-fleet finish.

The 2017 edition of the FBYC One Design Long Distance Race started out with a pretty dismal forecast.  I had planned to sail the Laser and without somewhere to store a beer cooler in such light wind I took Matt Braun’s offer to crew on a Front Runner with him.  The race started in light air and slowly built as the afternoon went on.  We had a 2nd row start and had some trouble getting to clear air up the first leg.  On the second leg those who went closer to Stove Point were rewarded with breeze a little sooner. 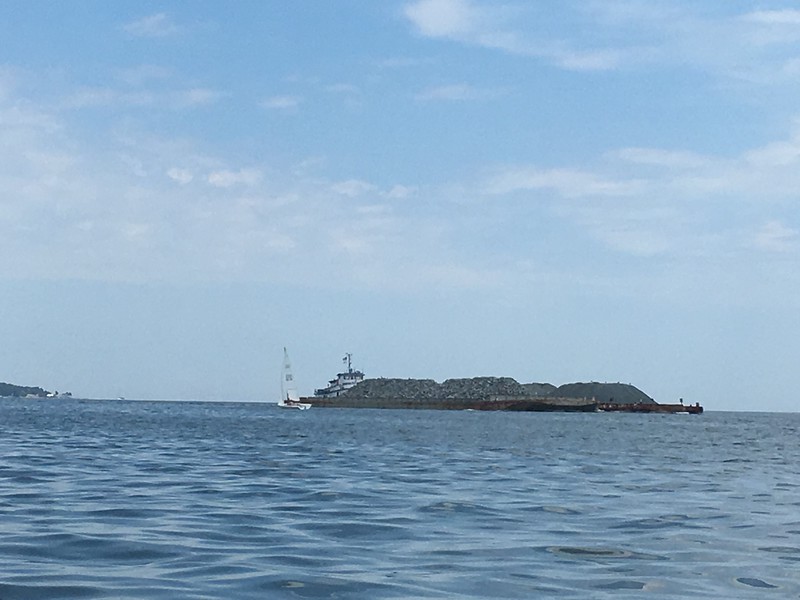 We put our game faces for the 2nd half of the race and caught every shift and puff and clawed our way back to the top 3rd of the fleet.  The race got a little interesting about halfway through when a barge came down the course just as boats were exiting the channel.  Thankfully everyone had maneuverability and was out of the way by the time they came through. Thanks again Matt for a great day of sailing! 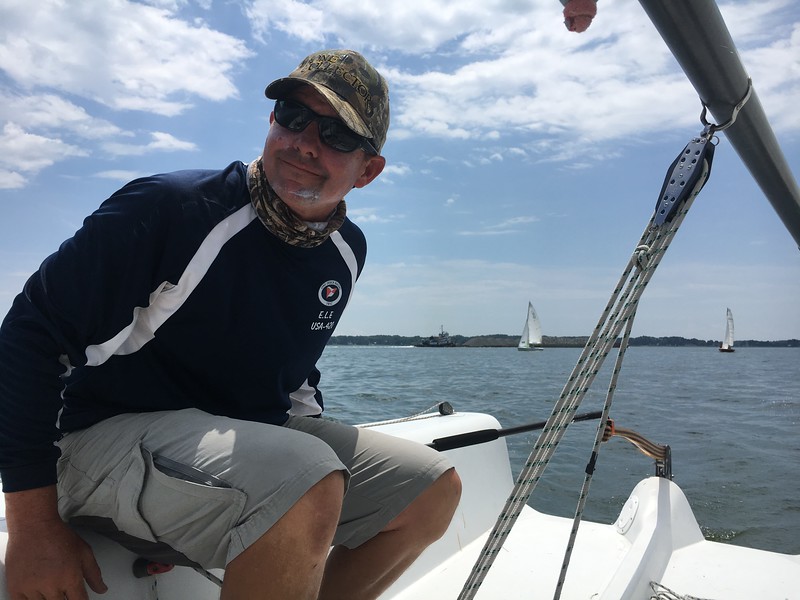 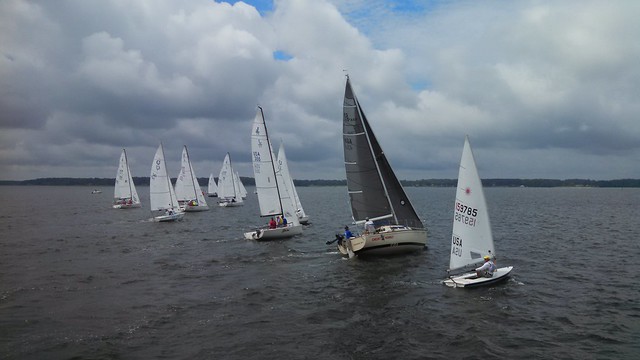 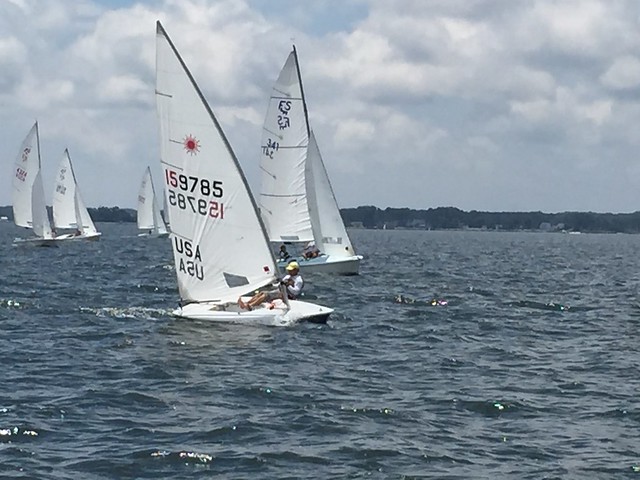 Hurricane Arthur spoiled our plans to do the Annual Long Distance Race at Fishing Bay Yacht Club.  I was going to be sailing a Front Runner but the storm rolled through in the morning hours and so the racing was cancelled.  The Hurricane was well east of us and all we got was some rain and wind for a few hours.  We never saw winds much above 40.

Once the rain subsided much of the rest of the day was spent hanging out and doing a little bit a boat work.  By the afternoon the sun was out and it was a beautiful day albeit still a little windy.  We went for a boat ride, enjoyed the 4th of July party and band at the club  and then went out for another boat ride to watch fireworks 360-degrees all around.

By jon Posted on July 7, 2014 Posted in Life No Comments Tagged with 4th of July, Deltaville, FBYC, One Design Long Distance Race

Thursday was July 4th and Fishing Bay Yacht Club‘s annual one design long distance race.  I was able to borrow a Front Runner and a co-worker of mine – Stephen Boling came out to crew.  Stephen had never been on a sailboat before.  We headed out, got to practice each maneuver once and then the race started. The race started right of the FBYC dock and the first leg took us south out of Fishing Bay 3/5 of the way across the river to the far side of the channel.  We had perfect start, right at the boat, right at the gun and were able to pin some of the other boats to the left side of the course for a bit.  Upwind we picked a nice lane of wind right up the middle of the bay and found ourselves 1st at the windward mark.

We set  the chute on the 2nd leg which took us due east on a race about a mile to another channel marker.  What we didn’t realize when we first set the chute was that it was very twisted at the top.  After a few boats started to pass us, we had to take it up and down a few times to get the twist out.  By the time we close-reached down to the 1/2 way mark, we were easily 300 yards behind the lead pack of 5 boats. Sailing the next two upwind legs we had good speed and I picked good angles and we actually passed 3 of the boats. By the finish we were within 20 yards of the 2nd boat over the line. If only we had another 3 miles, we could have contended for the lead. Unfortunately, all 3 of the top boats owed the Flying Scot, sailed by John & Sharon Wake, time and they corrected over us, putting us in 4th overall.

I want to thank the Front Runner fleet for letting me borrow a boat and Stephen Boling for coming out to crew.

Photos above by Stephen Boling. 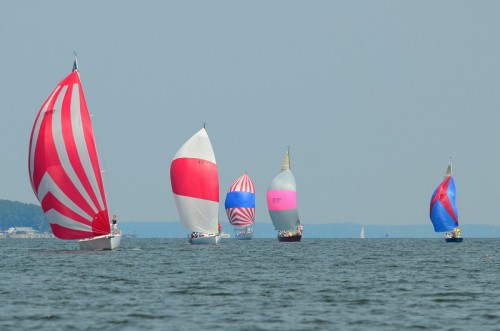 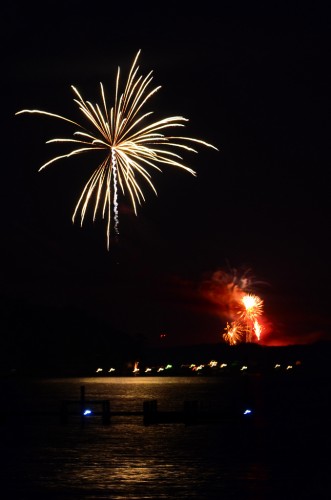 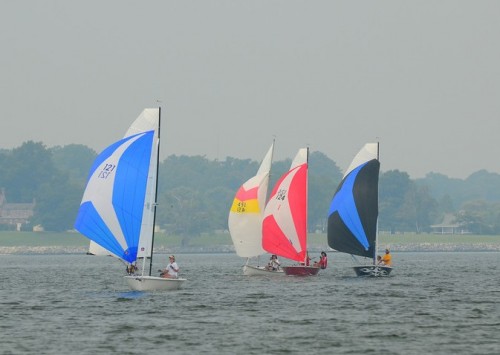