Saying Goodbye to the Strange Bird

Our adventure with the Strange Bird Snipe came to and end 5 years to the day it started in 2016. The bird flew to North Carolina to be with a new owner and hopefully be sailing on Kerr Lake in 2022. Refurbishing the bird was a fun project over the years and Jess and I had some fun sailing it together at Fishing Bay Yacht Club. Hopefully the bird will see a little more use with a new owner!

Here’s a look at the boat over the years.

In Spring of 2020 we took a socially distanced trip to Deltaville to take the Snipe out for a day of practice and to get out on the water for the first time that year. We rigged the boat and sailed some reaches back and forth in front of the club in the 8-10 knot north wind for about 20 minutes. With everything going well we decided to sail downwind out into the river and into the stronger winds further south. Downwind was fine, but just a minute after turning to go upwind with the boat fully powered up we heard a bang and the shrouds all went slack. The mast stayed vertical, but it had fallen through the mast step and was sitting on the bottom hull of the boat 4″ lower than it was supposed to be. We hobbled back to the club and took the boat home for repairs.

The boat is a 1986 Phoenix Snipe and had a wood mast step. It had likely been cracked for some time as the boat took on some water in the parking lot when rainwater would run down the mast. It wouldn’t get water in it when we were sailing or when it was stored covered with the mast down. So began some research to figure out how best to repair the step and make the boat sailable again. On the advice of a snipe-sailing friend I posted a note in the Snipe Sailing Facebook Group asking for suggestions. I knew rebuilding the structure that was there was going to be hard and was hoping someone had some experience with this. Marcus Ward suggested rather than repairing what was there, to just put a fiberglass plate over the hole with a new mast step and shortening the mast.

We started by getting a Selden mast step. The existing mast base was just a little too wide to fit in it so we needed to grind down the sides a bit to make it fit.

To cut the G10 fiberglass plate we got a saw blade, used for cutting tile, to use on the table saw.

To mount the plate in the boat we used West G/Flex Expoxy 655. The floor of the boat it was mounted to wasn’t flat and so this product has some filler and would bridge the gap and create a solid bond. Then screws were used to mount the mast step into the board.

With the mast step in place, I needed to cut the mast down as far as I could so it would be the same height as it was. The challenge was the jib halyard block at the bottom of the mast. We would need to make the mast base fit around the block if we were going to shorten the mast as much as we could. The mast base was milled and ground down to fit the mast.

The next step was actually cutting down the mast. I used a 200-tooth aluminum and plastic blade on a miter saw to get a clean and square cut on the mast.

The final step was mounting the vang blocks to the plate near the base of the mast and then actually re-rigging everything that had been taken apart.

With the mast being .75″ taller than it was, I’m sure it needs to be re-measured and adjusted. The mast collar had to be adjusted just a bit so it hit the boat in the right spot. We’re just happy to be able to sail it and to extend the life of the boat a little bit longer.

Huge thanks to Marcus Ward for the idea, Stan Deutsch for the help and tools, and Frank Hoos for milling the mast base.

Tagged with: How To, Richmond VA, Snipe, Strange Bird

This year on the Snipe we’ve had a goal all summer to: finish all of the races in a regatta, Jess driving, and not breaking anything. We finally had the perfect day to do it.  ‘Jess Wind’ if you will that’s just enough to be challenging, but not so much that we’re overpowered. We had a 3-boat Portsmouth class sailing against Lee’s FrontRunner and Mike’s San Juan 21. The wind was 8-10 out of the North East and the RC set a course between areas A and B.

In the first race we had a good start and sailed well, but didn’t have the boat tuned as well as we could. We focused on reading the wind and keeping the boat moving and sailed a solid race finishing behind the other boats and taking a 3rd after the handicap was calculated.

For the second race we had the boat going a little better and made some good tactical decisions. We were the first boat to the first weather mark, but were overtaken by the Front Runner downwind and the San Juan was still able to correct over us.

In the 3rd race the wind was as far right as it had been all day – knowing it would go back left we banged the left corner while the rest of the fleet went right.  Sure enough it came back and we had very solid lead at the first weather mark that we were able to hold the rest of the way around the course and got the bullet.  Jess’s first as a driver.

In the 4th race we again had a good weather leg leading the other boats to the first weather mark, but didn’t have enough separation and still finished 2nd.

Jess sailed great.  She’s learned a ton about the boat and being a driver and we’re both making the boat go better and improving our maneuvers. We wore out a few parts that need fixing, but nothing that was unexpected and nothing that prevented us from sailing.

For FBYC’s Long Distance Race Jess and I took out the snipe. After not being able to finish the Open House Regatta earlier this year, we were excited to hold everything together and have a respectable mid-fleet finish. 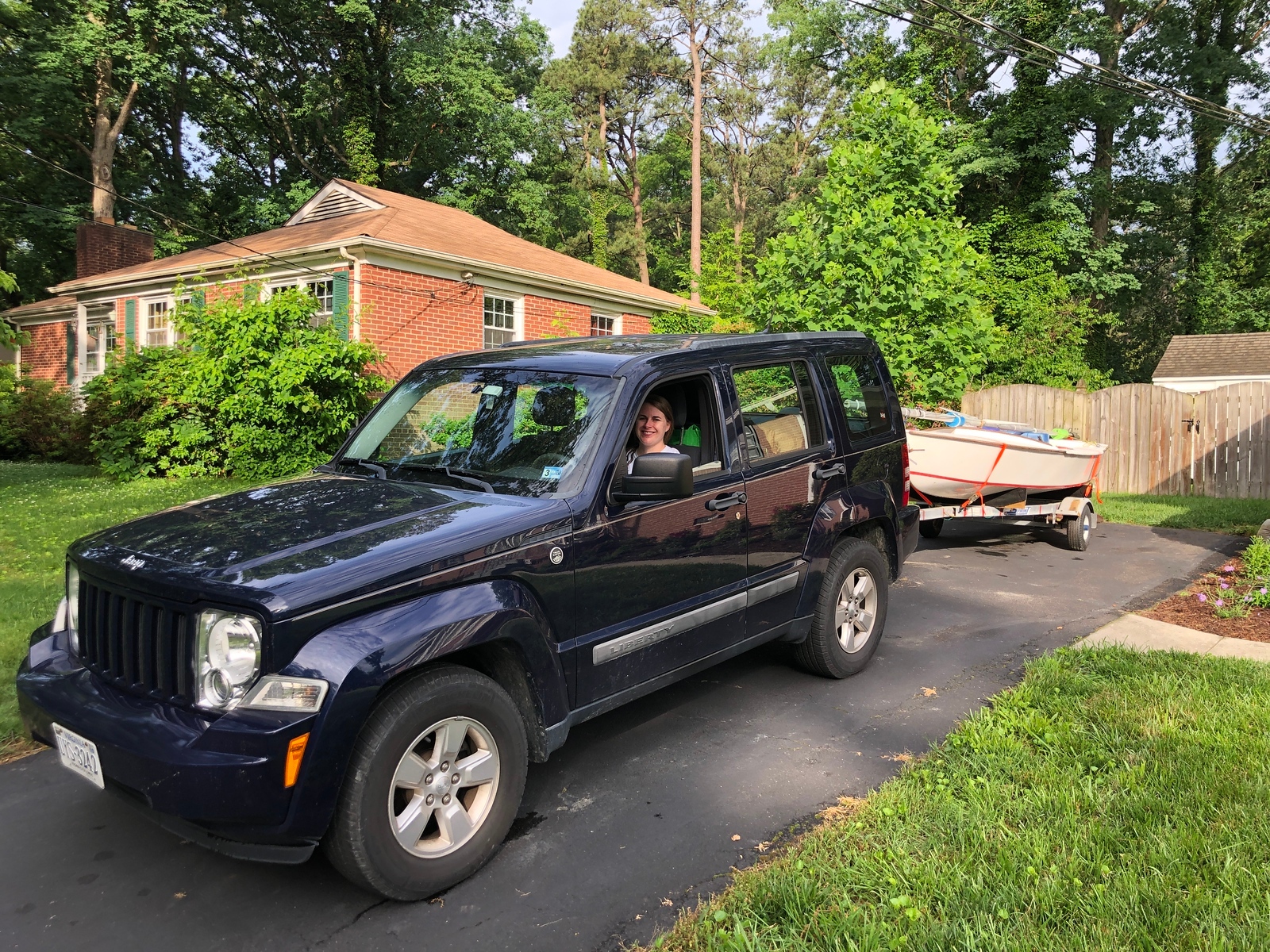 We got Jess’s snipe back in the water for the first time this year. We made some upgrades – mainly new halyards and halyard turning blocks in the mast.

We got to FBYC early for the One Design Spring Series #2 event – Jess towed the boat behind the jeep for the first time – and we got everything rigged and in the water. We were a little late to the start of racing and caught the 3rd race. We were in the Portsmouth class with two San Juan 21s. 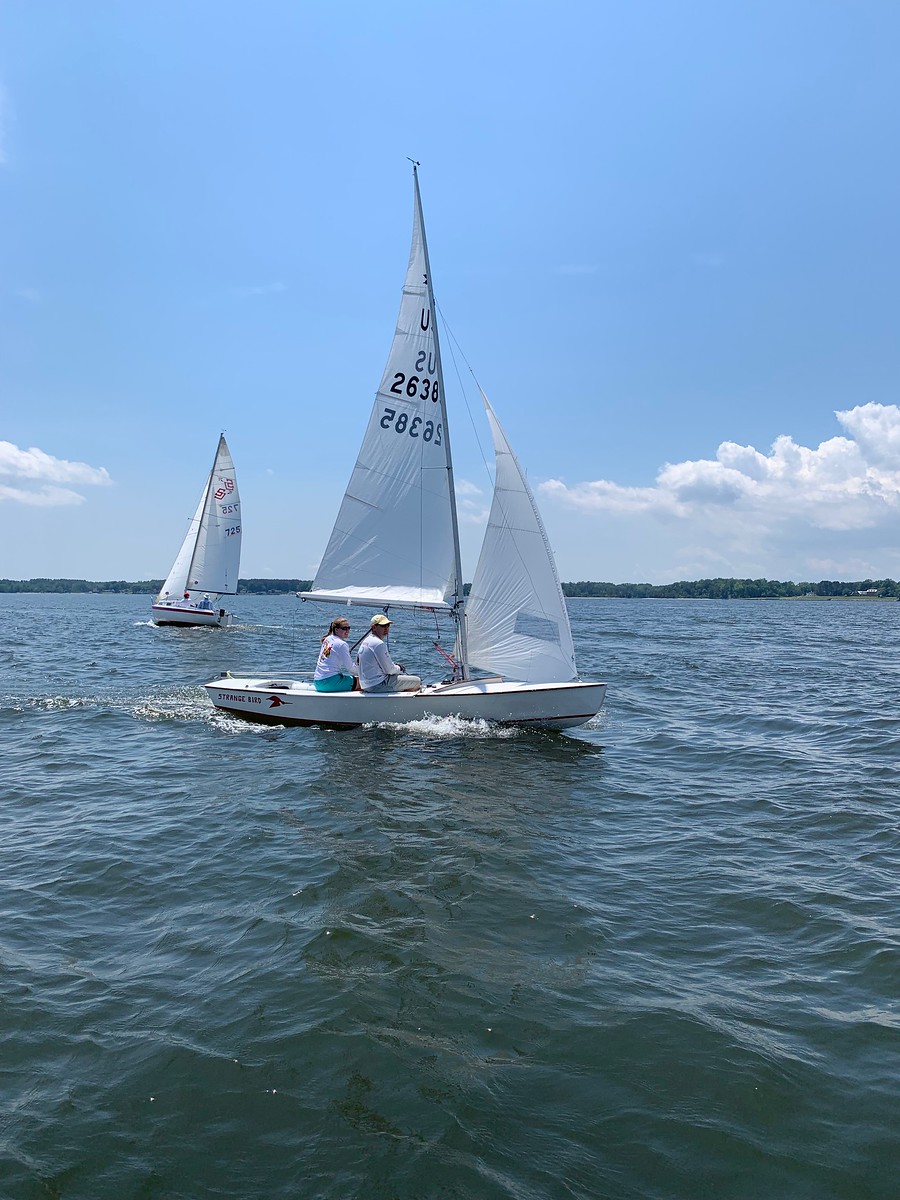 We were about halfway up the first leg when the halyard that we had just installed broke – putting our jib in the water. We attempted to sail under main alone, but got stuck in irons and so far behind we gave up on that race. For the next race I drove under main alone around the short 2 lap windward leeward.  We still managed to beat the San Juan 21s around the course, but one of them corrected on time to tie with us so we got a 1.5 for the one race we finished.

We started the Memorial Day Weekend by hosting a Young Adult Member cookout at FBYC.  We had a great turnout of nearly 40 people and beautiful weather for a party that apparently went well into the night.

Jess and I spent Saturday morning putting the Snipe together for the first time since Labor Day of last year. We fixed a few things along the way including some trouble with the main halyard that kept jumping the sheave at the top of the mast.  Eventually we made it onto the water and sailing pretty good in the 10-14 knots of wind. About 20 minutes into our sail we heard a pop, saw the jib come down a little bit and realized that we blew out a block at the bottom of the mast for the jib halyard.  We sailed in and ended our hopes to sail  the boat again tomorrow. 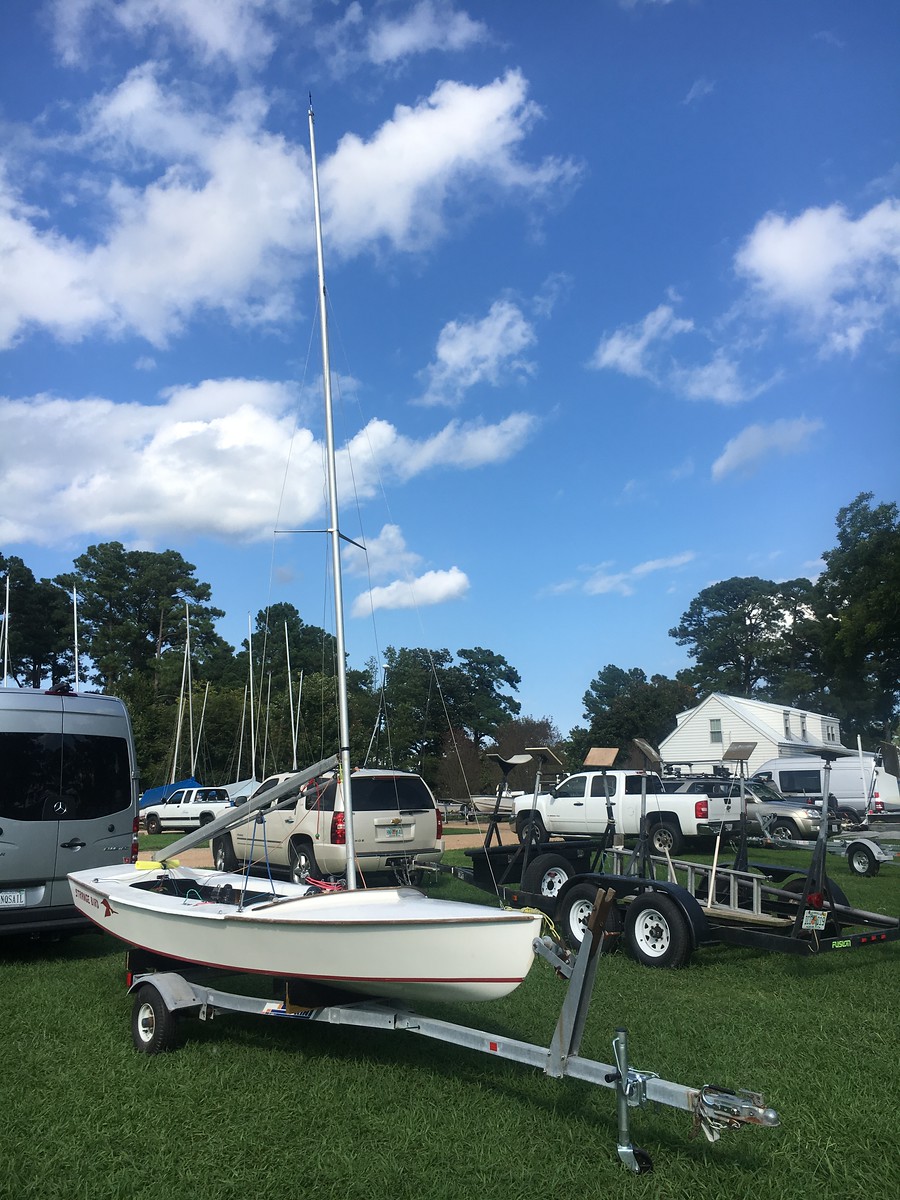 With the Strange Bird Snipe restored it was time to take it for a sail.  Jess, Laurie and I rigged it and went for the first sale on what turned into a gorgeous Monday of Labor Day Weekend. Even better – she floats! We took turns sailing while figuring out how everything is rigged and what still needs some work. 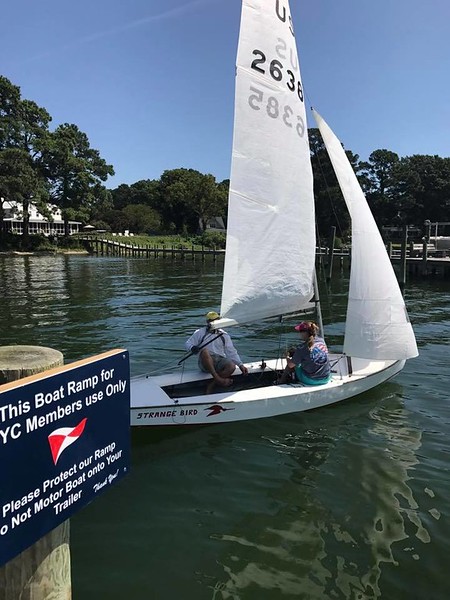 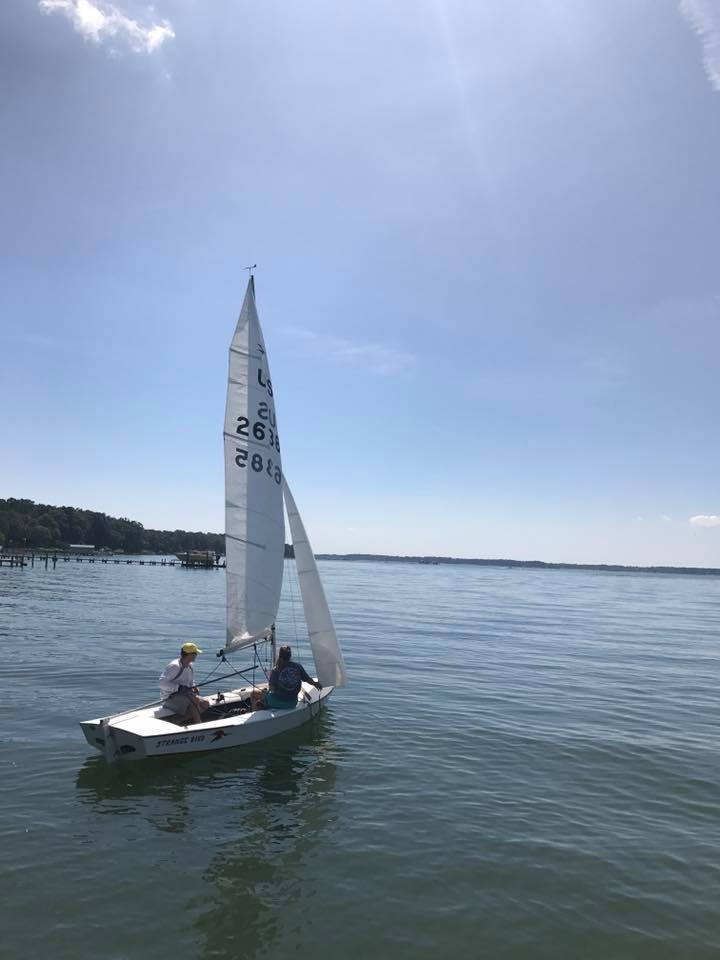 It’s been a goal to get the Snipe Strange Bird out sailing before the end of the year and it looks like this might happen on Labor Day weekend.  Since I picked it up in December a lot has been done to it to get it back into sailing shape:

Late last year I came by a Snipe and began getting it back into sailing shape this year.  One element to getting it sailing was to get a road-worthy trailer under it.  After trading some cash and an old AppleTV I got a used Laser 2 trailer that would fit the snipe nicely.  I replaced some of the hardware, addeda jack and new wiring and lights. The hardest part would be building the bunks and what made it harder was the fact that I’d have to do it while the boat stayed upside down in my backyard.

We made a pattern for the bottom of the hull by using a jig to draw a line on the board that matched the shape of the hull.  See the device here.

The shape fit the hull perfectly and just needed to be mounted to the trailer.

And the boat finally upright on the trailer:

Tagged with: How To, Snipe, Strange Bird