This week I had planned on sailing on Excitation, but FBYC was in need of a PRO for the first Spring Series race day and it was a chance for me to jump in and volunteer. I’m super appreciative of all of the people who joined us, particularly those last minute.

We had 10 boats total and took the 2 fleets just south of the Stingray Point light to race into a SE breeze at 10-14 knots. After a short postponement to lengthen the line we got both fleets started on a 1.25nm course. By midway into the race the wind would ease a bit to 8-12 where it would stay for the rest of the day. Thankfully the wind didn’t change direction and enabled us to leave the course set or both races making it easy on us.

Cheeky Monkey had a fast sail in the first race. The Nanuq team was sailing like a well-oiled machine nailing their maneuvers on this early season race day. Excitation would put in a solid effort and Mad Hatter had a good day to win the PHRF-BC fleet.

A couple things I learned or were reinforced as a PRO – it was really critical to have a conversation with the two fleet leaders before we went out so we could talk about the length of course, sailing area, number of races and timing of the races. We also discussed some options should expected changes happen. This made it easy on us so we knew what to expect and was great for the racers as they got exactly what they wanted and knew why we did what we did.

Thanks again to Cathy, Donna, Vera, Carol, Rick, John K, Joe R and Wade for all of their help on RC making it a great day for the racers.

For Fishing Bay Yacht Club’s Offshore Fall Series #4 I was aboard the weather mark boat with Justin running marks for the races. The wind was steady out of the west making it easy to set the course once for both races. With winds in the upper teens and temperatures in the 60’s – there was some spirited racing and it was fun to watch. Definitely interesting to see which boats were trying hard and making mistakes versus the boats that took it a little easier and were less aggressive, but made fewer mistakes.

We had the final day of one design racing at FBYC and it was a light one with just a few boats out.  I was solo RC and ran Portsmouth racing for the 2 Front Runners and 2 Flying Scots.

On Saturday I had the unplanned opportunity to be the PRO (Principle Race Officer) for Fishing Bay Yacht Club‘s Summer Sea Breeze regatta.  I was all set to race a Front Runner, but we didn’t end up having a fleet and my crew Stephen Boling came along to help run race committee.  Now I’ve been on signal boats and race committees a hundred times for everything from club races to national championships – but this was my first time actually being a PRO.  Lucky for me the wind was steady enough not to have to change the course and we were able to get 5 races off for the Flying Scot fleet and all went very well.

Another great weekend in Deltaville.  Saturday was probably the last regatta I am going to sail in for the year.  It was the Sail Against SIDS/Indian Summer Regatta and we had 3 lasers out.  I can’t say I sailed very smart, missing things like the number of laps and major wind shifts.  But I made up for it by being fast and won 5 close races.  It was fun sailing with Mike and Steve and I want to thank Allan’s crew for putting up with me always wanting our fleet to sail a different course than the other fleets. 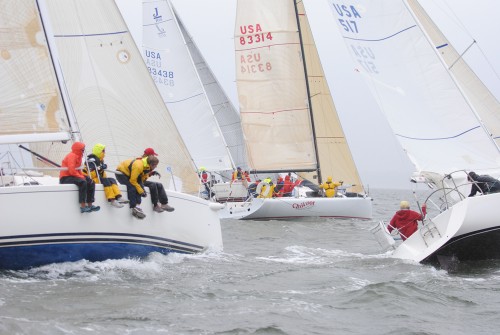 Sunday was the Offshore Fall Series #2 at Fishing Bay Yacht Club.  I ran the mark boat with Miles.  With a strong, cool north wind, we sailed the races in Fishing Bay.  Occasional light rain added a little misery. It’s always a sight seeing 15-20 twenty to forty footers racing in the shifty conditions in the Piankatank.

Despite the bad weather, I was able to get some pictures of the action that can be seen here. 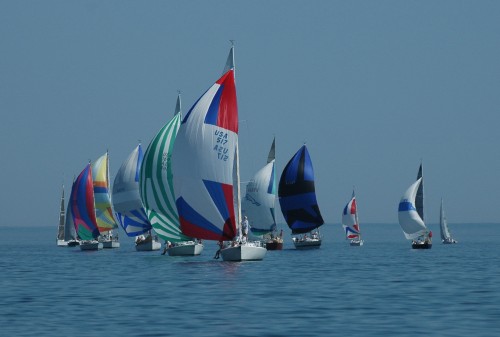 This weekend I got out to help with Race Committee and photograph the Fishing Bay Yacht Club Offshore Spring Series #2. The complete collection of photos can be found here.