Got out sailing for the fist time in 2021 on the ILCA Dinghy (what it’s being called now instead of a Laser). After setting up some new rigging, I sailed in some very light wind, sitting out just a few times and hiking exactly once in a puff. I did sail for about 2 hours and went just around Stove Point enough to see the start of the big boats in FBYC’s Opening Day Regatta.

I also got to try out some new technology – a Wristcam. For the last year I’ve been sailing with a cell-enabled Apple Watch and using Siri to tweet updates on the racing. The Wristcam is a bluetooth device that replaces the watchband and enables me to use the watch to take pictures. I can’t immediately tweet them out, but it at least enables me to take a camera with me without carrying any extra equipment.

Even though the wind wasn’t much, it was good to be in a boat. Looking forward to more racing at Hampton, FBYC and Norfolk this spring.

Having gone without an SLR for a few years I finally picked up a used Nikon D300s. It’s 10 years old and doesn’t do video well or have many fancy features, but is just enough to capture some sailing shots and some sunset shots that the iphone just can’t quite do justice. I paired it with a used 18-200 (not pictured).

By jon Posted on July 15, 2020 Posted in Life, Photography No Comments Tagged with Camera Recalling the many cameras I’ve had over the years.

By jon Posted on November 17, 2012 Posted in Life, Photography No Comments Tagged with Camera

This week I upgraded to a new Digital SLR camera.  The Nikon D7000 finally does decent video with stereo sound at the right price.  Last summer I bought the Nikon D3000 when my then 6-year-old D70 needed replacing.  I knew that would only be a temporary camera until Nikon came out with the right camera for me.  In addition to the camera I’ve also gotten the vertical grip and a Sennheiser shotgun microphone.  I’m looking forward to both the better quality photos and the better videos this camera will make. The point-and-shoot camera really wasn’t cutting it for a lot of the videos I wanted to make.  I’m going sailing this weekend and will have a great opportunity to try the camera out.

By jon Posted on April 1, 2011 Posted in Life, Photography No Comments Tagged with Camera, Nikon D7000 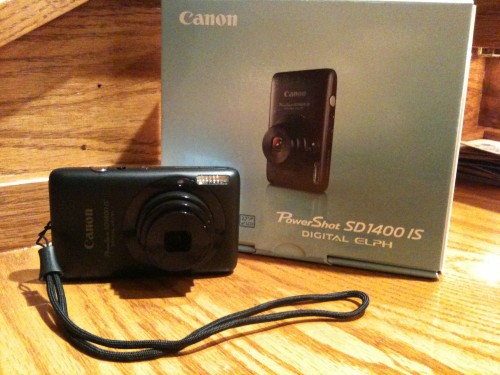 My second of two Canon SD870IS cameras bit the dust this weekend.  It had survived boating, tailgating, snow, rain, beaches, trips to 10 different states, spilled beer and numerous drops, but it was no match for Christmas dinner.  At some point Christmas Eve the lens was scraped ruining the photo quality.

It has been replaced by the camera pictured above: a Canon SD1400IS.  This is my 6th camera in a little over 6 years. It’s not a high-end camera, but will do what I want and has HD video.  For the price I won’t feel too bad if it suffers similar fate after a year and a half.

By jon Posted on December 27, 2010 Posted in Life, Photography No Comments Tagged with Camera I pulled the trigger on a new digital SLR camera recently. My Nikon D70 is going on 5 1/2 years old and is starting to become un-reliable. I’ve got quite a few events this summer that I want to be able to take pictures at and need a camera that just works.

Unfortunately Nikon hasn’t come out with the camera I really want. I’d like to get whatever camera replaces the D300s assuming it does video with auto focus.

Since the D300s replacement is likely a year away, I bought a Nikon D3000. This is the most entry-level SLR in Nikon’s current lineup. It’s a cheap camera that I got factory refurbished on eBay that should hold me over for a year or so.

The camera doesn’t have stellar reviews, but it’s still an upgrade over my older camera. The bigger screen is a huge improvement. I’ll miss some of the dials and controls available on the higher-end camera, but again, this is a temporary camera. It’s a lot smaller than the old camera and I had to put one of my smallest lenses on it for the picture above just to make it not look like a dwarf next to the larger lenses.