What wind we didn’t have on Saturday came on Sunday making for some windy racing. With only 4 boats out today, the regatta came down to how I did against David Hartman who started the day 2 points ahead. We were joined by David Grace, a CNU sailor, and Frank Patch.

I focused on having good clean starts and working to hold my lane off the line on the first beat. We had some current going left to right which lead me to favor the left side of the course and staying on starboard as long as I dared. As would be proven to me, picking shifts to the right would still beat playing the current, especially given the winds in the mid to upper teens gusting to 20.

In most of the Races I played the middle left of the course, David G and I would cross tacks and be within a few boat lengths of each other at the top mark, sometime me ahead and sometimes him. I would make up some distance on the reach and David would either pass me or pull ahead on the downwinds. Once I was behind I sailed a little more conservatively to hold my position and not break anything and save my energy for the next start. I did manage to lead one whole race capsized once in another race. David and Frank were usually just behind us on the trapezoid course with inner and outer loops (we sailed the outer).

Racing in this wind was the perfect way to start the season and get comfortable in the boat again. With a regatta at FBYC in May followed by Districts in late May and ILCA Nationals in June – both at Norfolk YCC – this was exactly what I needed to get back into ILCA sailing. Thanks Max and everyone at Hampton Yacht Club for hosting, and to David H, David G, Henry, Britt and everyone else who came out to sail. It was great to get out and go sail somewhere else after not doing any travel regattas last year and nice to see everyone again.

I have some fond memories of frostbite sailing and a sailing district championship in 1998-1999 and I haven’t sailed a Laser/ILCA dinghy there since. While I had sailed at Hampton on other boats – it was good to be back with my own boat and good to be sailing my first regatta of 2021.

There was some wind to get us out to the course and once there it completely shut off. The ebbing current was starting to build and so I just tied off to one of the marks and sat there for 2 hours. The locals all claimed “It’s never like this in Hampton.”

Eventually the wind did fill in from the south with just a few knots and a race was started for the 5 ILCA Dinghies as well as for the Radial fleet. I had a great start at the boat and quickly realized I was slow off the line with the wrong outhaul setting. I was half a boatlength ahead of David Hartman coming into the top mark on the port layline and had to duck him. I followed him the rest of the way around the course for a 2nd.

The wind shifted left between races, the course was reset and we sailed another race. I had a great start at the boat and stayed in the middle left of the first beat. Chris went more left while David went more right where there was pressure and both were just ahead of me at the top mark. I followed them downwind and on the 2nd beat we set up much the same with Chris to the left and David to the right only this time there was a lane of wind right down the middle of the course and I was able to stay in pressure and passed both to the top mark and finished in 1st.

By the 3rd race the wind shifted left again and now it lined up so we were sailing directly into the current on the upwind legs making them a very slow slog. Downwind sailing with the wind just faster than the current made it tough to keep the sail set right and doing anything other than just driving down. By the end of the race the wind totally dropped out and the race shortened for both fleets. My efforts to sail in shallower water out of the current took me to less pressure and so I was never able to get around Henry and settled for a 4th.

The race committee towed us in just as it started drizzling. Sitting in 2nd, 2 points behind first and day 2 is tomorrow.

Sunday ended up being the day for wind.  It started out light as we were heading to the course, but as we were arriving it piped right up.  We quickly re-tuned the rig for the windier conditions sailing all the way across and up the river near the naval base. Dave, pictured above, was our secret weapon.  As a local Harbor pilot he quickly identified a current line up the right side of the course upwind.  On the other side of the current line we had almost 2+ knots of favorable current.  At one point we were 50 yards from another j70 going slower on the other side of the current line and they couldn’t figure out why they were so much slower going so far as to check they weren’t dragging something.  We made good gains out there before the rest of the fleet started to figure it out. Downwind in the breeze we played it conservative with the spinnaker keeping the boat under us and getting around the course cleanly. A second place finish in the 2nd and final race of the regatta gave us 3rd place for the day, but left us in 5th for the regatta.

Racing Saturday at Southern Bay Race Week started light and we were at the inshore course close to Hampton.  We got out there and there was a whiff of a breeze and so they started us, but by the time we reached the weather mark, the wind had died and the current was running and nobody could get around it.

An hour or so later the wind filled nicely allowing for 4 more races.  We dropped a spot overall, but closed the points gap with 3rd place. 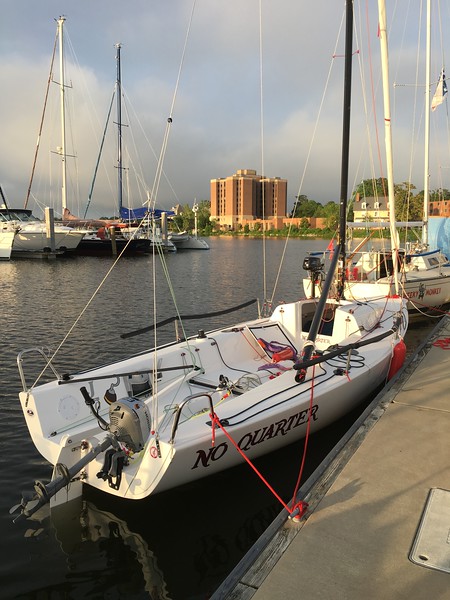 After arriving yesterday and setting the boat up, we were all set for what would be a very light day for racing on Friday.

The wind eventually filled and we got in 5 races and found ourselves 4th out of 7. The 3rd and final day of Southen Bay Race Week was 3 windward-leeward courses sailed to the south off of Ocean View.  We had warmer conditions than past days and wind that hovered around 14 in the first race and went down to 8-10 by the last race. Our first race didn’t start well- we fouled a boat before the start and after doing circles we were almost a minute late at the start.  Upwind in the first part of the beat we made some good moves and caught back up with the fleet.  The rest of the race went well and we were able to pull off a 5th. The 2nd race of the day was a bit tougher on us and we had to settle for an 8th.  In the final race of the day we had a great start, and got around the course, but couldn’t quite hang with the bigger boats that pulled away and put a few places between us.

In the end Sea Star and Voodoo 2 got just enough points on us in the final races to tie for 4th place, leaving us just one point behind in 6th.  We came close and had a good race and definitely a fun time.  Thanks Sam Mitchener for having me along.  It was great sailing with you, Mark, Mayo, Bonnie, Melissa, Chris, Mike, Marie, & Jerry.

Today was distance race day at Southern Bay Race Week.  It over an hour of pounding into waves under motor to reach the starting area just North up the bay from the mouth of the James River.

The first leg was a beat out and up into the bay.  We picked a pretty good layline from 5 miles out and rounded with the leaders.  Downwind some of the longer boats with bigger downwind sails were able to grind past us and we had to settle for a 7th. After racing I wore my best pirate costume and spent a couple hours walking through the Blackbeard Festival going on in Hampton this weekend.  Some of the costumes were pretty amazing and they kept firing cannons all afternoon. Southern Bay Race Week started with triangle courses in the James River just outside the Hampton harbor.  We had some good starts and stayed in the fleet and had a good day putting up 4-5-4 in 3 races and were sitting in 4 at the end of the day. This weekend is Southern Bay Race Week in Hampton VA and today I was helping Sam Mitchener deliver Double Eagle to Hampton for us to race on.  We had a cool overcast day with winds out of the Northeast ranging from 10-16.  The 43nm trip in lumpy conditions was otherwise uneventful and we made it in just over 7 hours motoring the entire way.  Tomorrow the rest of the crew joins us for 3 days of racing and hopefully some warmer weather.  I’m looking forward to my first time at Southern Bay Race Week!