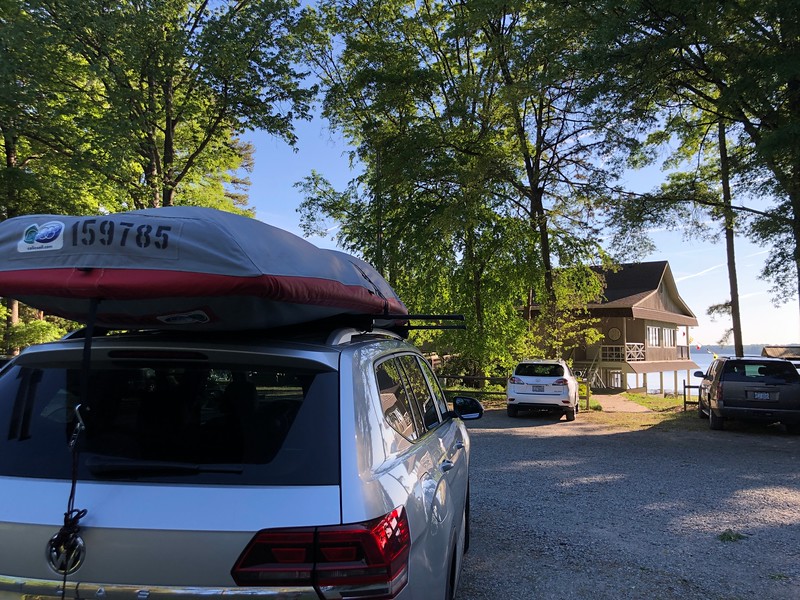 Lake Norman Yacht Club held their spring regatta and I was one of a dozen Lasers among the various other fleets sailing. This was a good shake down trip with the new VW Atlas cartopping set up and I got to visit and stay with college friends and check out a few spots in Charlotte.

On day one we sailed out to the course in nice wind, it shifted around a couple times and a race was started. The RC lost a minute in the starting sequence, but started anyway. The race would later be thrown out which was unfortunate because I had a good race and climbed my way up to first by the end. The wind would die by the end of that race and shift around for about an hour before finally settling in for another race.  In the second race of the day the wind built a bit.  I was in second place starting the last downwind leg and got passed downwind by two boats.  They both ended up colliding just before the finish resulting in a protest that I wound up participating in as a witness. The wind built a little more for the next two races before dying again in the last race of the day.

Being my first time out for the year I didn’t quite have super speed upwind.  I also struggled a bit to stay in the grove and shift gears while keeping my head out of the boat.  I suspect practicing with the old sail the prior weekend didn’t help me much and it also showed me I just needed more time in the boat.  My starts were generally pretty good and my downwind legs were typical for me.

Saturday, after the protest hearing was wrapped up I met Courtney and Preston at the US Whitewater Center just outside of Charlotte where the Tuck festival was going on.  The center has two man-made white water courses and a whole bunch of other trails and outdoor activities. For the festival there were bands play, vendors and all kinds of people there – thousands checking it all out.  We had a few beers and checked everything out before getting dinner out in Charlotte.

Sunday the wind started out a bit lighter, we sailed a race in light air where it died at the end, then one more race in brutally light air.  I sailed in while the fleet was postponed only to have them join me a half hour later. In the end we had 6 races that counted and I finished 6th overall.  It was great hanging out with Preston and Courtney and getting to meet a few more Laser sailors from NC. Lake Norman is always a great venue to sail at and I look forward to a lot more sailing this season.