Saturday was the final day for the offshore spring series at Fishing Bay Yacht Club.  With winds out of the north west at 8-10 it was expected to go west and die off.  We didn’t end up with that – it built and went east! On Wavelength we were a little late  at the start of the first race, but we tacked out and were able to get some clear air.  We were sailing a 3-lap .75 mile course.  Not exactly our favorite to be doing so many turns.  Luckily we sailing 10-up and had plenty of help to pack the chute just in time to need it for another downwind.

This being the 5 race day for us this year – we really had some of the crew-work down well.  We were executing maneuvers with less notice and doing them faster with less loss of speed during them.  And even when we did make some mistakes like dropping the sheet-guy over the bow on the take down and catching it around the keel – we recognized it and recovered immediately with little fuss. 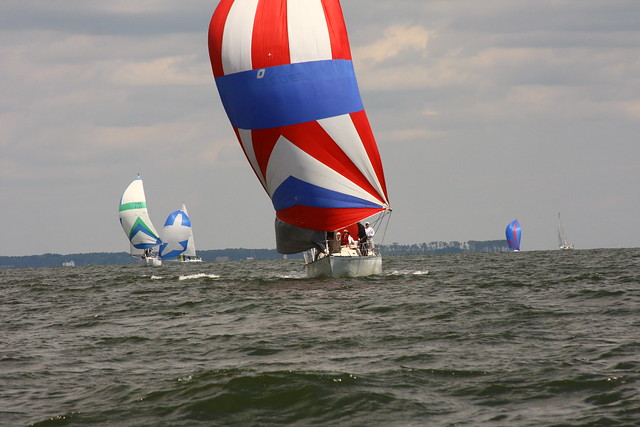 In the 2nd race we had a great start and for the first lap we actually held our own with the faster Double Eagle and Voodoo 2.  Eventually they stretched their legs and started pulling away from us.

In both races we were 3rd over the line and 2-3 minutes out of 2nd on corrected time.  We knew we just need to finished today’s races to finish 2nd overall in the spring series.  Another successful day to conclude a successful series!