Day 2 at the Lake Norman Yacht Club Spring Lightning Invitational was to see lighter winds – but we were pleasantly surprised with 5-8 knots for our first race.  Steve, Jeff and I had another good start and stayed in the top 5 all the way around the course making gains near the top of the final upwind and finished with a 2nd.  That gave us a few point lead over 2nd place Greg Fisher going into the final race. 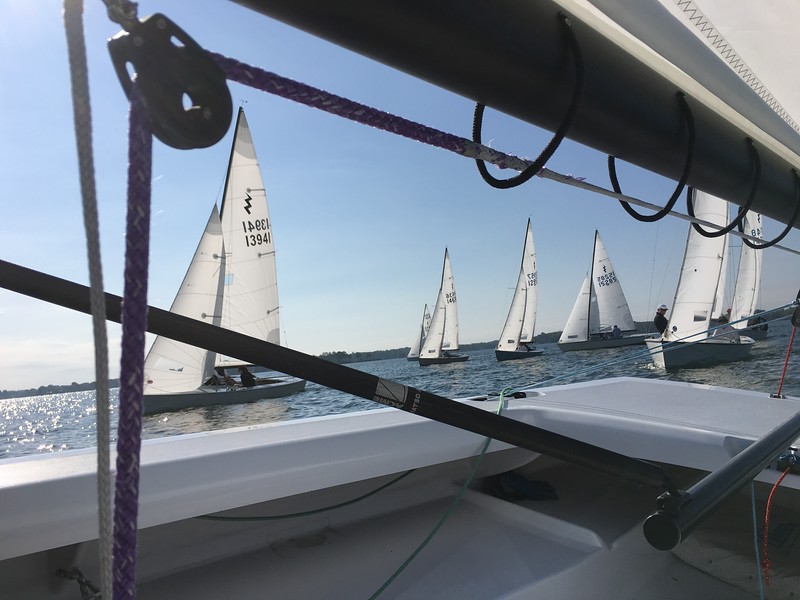 As the 2nd race started the wind began to die.  We took a conservative approach up the middle and boats on both sides found more wind and rounded ahead.  We were around 8th at the top mark – picked up a couple boats downwind and then found the wind even lighter and more fickle on the 2nd upwind.  We picked some shifts and caught some boats and even crossed ahead of Greg.  But he found wind on the other side of the course and wound up finishing 3 boats ahead of us and we fell back to 6th as we reached the top mark for a shortened finish.

It wouldn’t be until we were arriving at the awards that we found out that we had tied Greg Fisher for 1st and we won the tiebreaker on account of having won 2 of the races.  A great result for a pick up team in a borrowed boat against some good sailors.  Thanks again Steve and Jeff Hayden for having me along and Bill for all of the hospitality at Lake Norman Yacht Club!