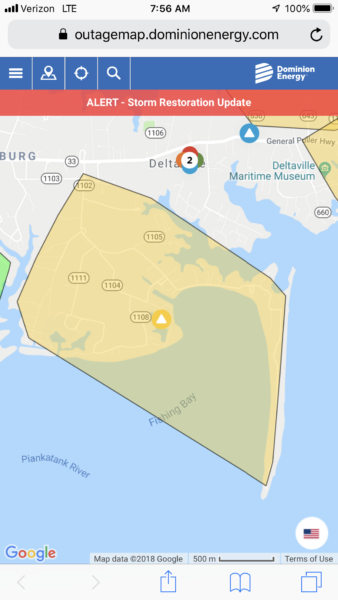 It’s a been a week of preparing for the 2018 Laser Masters Championship at Fishing Bay Yacht Club. Everything from building trophies, pre-cooking breakfast, ordering food to buying all of the other supplies was coming together.  Also coming this week was the remnants of hurricane Michael which roared through on Thursday evening. Friday morning I woke up to hear that FBYC was among the hundreds of thousands of customers in Virginia without power and the prospect of getting power before the end of the weekend was slim.

Calling around to our club manager, flag officers and others who are familiar with the systems at FBYC I figured out the following: The club had hosted an event without power after a hurricane in the past and had an electrician wire a place to plug in a generator. The water system had it’s own generator. And 4 J/70s had been knocked over in the dry sail lot. The water system was the only thing that could necessitate cancelling the regatta – it would be unsafe to have that many people at the club without proper sanitation. With the knowledge that we had that solved, I knew once on site we could use some ingenuity to solve the rest of our needs for electricity. I owned a small generator and I borrowed a bigger one from my parents and got on the road to Deltaville by noon.

Once I arrived at the club I found things as expected. I got one of the generators plugged into the refrigerators in the kitchen and worked on other preparations. Mayo Tabb – a member with extensive electrical systems experience came by a short time later and had a way to plug into the club generator outlet that was sized for a very big generator into a more standard household generator. This would enable us to power only 1/3 of the club including the refrigerators and range hood that we would need to cook on the gas stove top. Bob Fleck also brought by a bigger generator and by late afternoon Mayo had scavenged all of the parts to wire everything safely. We used the smaller generator to use the air pumps to inflate the marks and to wire it into the boat lift to get the mark boat lowered into the water.

While this was going on I communicating with the sailors who were driving in from as far away as Michigan, Colorado and Toronto. They knew our facilities would be limited through the weekend without power – few lights at night, no hot water in the showers and that we’d have to conserve water. 1/3 of the fleet was camping out anyway, so lack of power wasn’t going to be much of a concern. It also helped that all of the businesses in Deltaville had power, so at least folks could purchase what they needed. One way or another it was going to make it a memorable weekend and they were all in for the ride. Not a single sailor canceled or didn’t show.

Huge thanks to the club staff Bryan and Eric as well as Bob and Mayo who spent their afternoon Friday helping get things wired together.  And thanks to the fleet members Alain, Charlie, Britt, Frank, Mike, Ron and others for help pulling together the other details to make us ready.