It was the first day of racing at the 2018 Laser Masters Atlantic Coast Championship and we had 51 boat arrive including several who arrived late at night last night. With all of the preparations already made we went through the morning routine and it almost unnoticeable that we didn’t have power.

On the water we found the wind built to a few knots more than forecasted.  In the first race I was a little late for the start and had to go upwind in dirty air rounding the first mark below mid-fleet.  By the second upwind leg on the modified windward-leeward course I was able to pick some shifts and get within striking distance of the lead group and finished 9th.

At the start of the 2nd race the wind had shifted favoring the port end of the line and I was one of only 2 boats down there set to cross the fleet on port just seconds after the start. Unfortunately for me there was one boat to duck while I was on port and I took my eye off him for a second and managed to tag his transom. Two turns later there were only 3 boats behind me at the windward mark. I sailed well to pick off some boats and finished up in 15th.

For the 3rd race I had a great start in the middle of the course and held my lane well upwind.  I was in the top 5 around the windward mark and used some of the downwind knowledge I learned in the previous race to get around a couple boats to round the leeward mark in 3rd. Upwind I held my position and extended on the boats behind while Gavin and Rob extended a little on me, but I was able to come back a bit on them downwind with all of us rounding nose to tail. Upwind on the final beat to the finish I split with the two of them and managed to just get my nose in ahead of Gavin at the finish for a 2nd place.

By the 4th race of the day the wind was at the peak in the upper teens – this would be a triangle windward-leeward course. The wind was also shifty and while I was beating I got a puff and wind sheer that knocked me over before I knew what was happening. I was deep again in this race and managed to pull myself back up to 21. 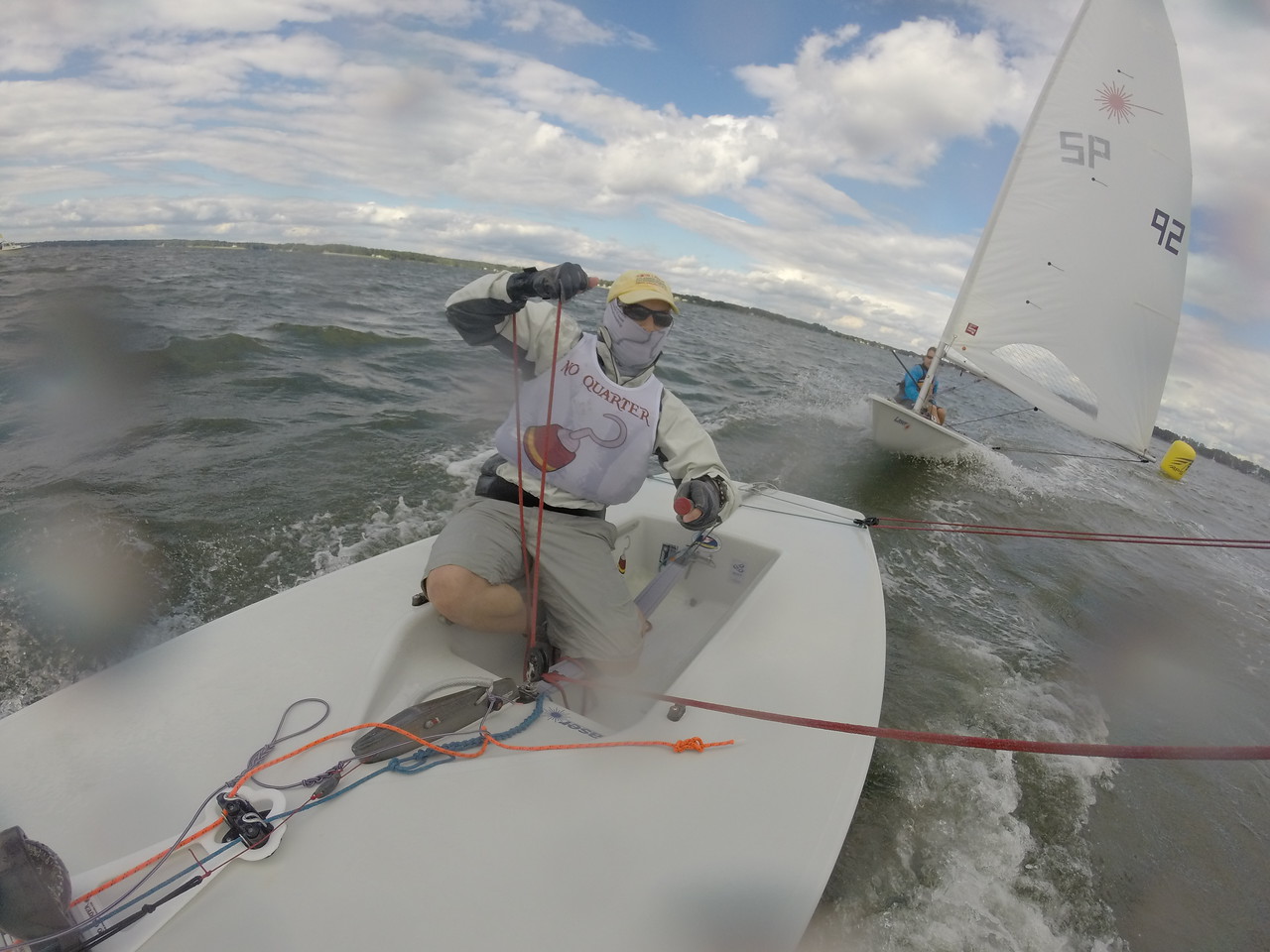 In the 5th race I had a good start and was able to sail with the lead pack the entire way around the course sailing my way to a 7th. Overall it was a fun day of sailing. We were fortunite not to have any light air where we were guessing where the wind was coming from. Not only did I have good boat speed upwind, I had much better boat speed downwind and felt like I picked up on the improvements I had made last month in Annapolis. When I didn’t hit boats, didn’t tip over and started on time – I did pretty well – I should do more of that!

Saturday evening back at the club we had a wonderful dinner prepared by Alain and his helpers.  We fed 93 people – under lights powered by generators with power cords snaked all over the club.

Tomorrow’s forecast is for lighter wind.