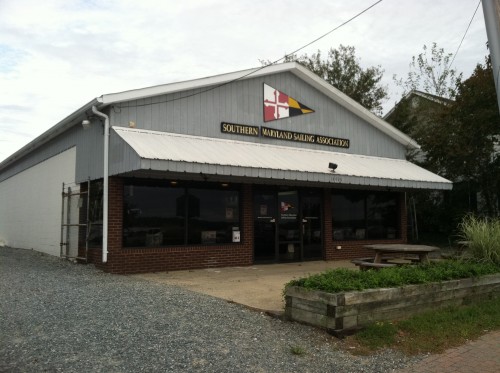 Southern Maryland Sailing Association on Solomon’s Island in Maryland had a Laser regatta this weekend.  Despite leaving a little late, I managed to make the first start on time time.  I haven’t been in the Laser for 4 weeks now, so it was good to be sailing again.  I didn’t quite have my mojo back in the first race and ended up 3rd.  Julio Vargas had some great downwind speed and pulled right away from us.

By the second race the wind was blowing 15ish with occasional sprinkles and overcast skies.  I had a good start and had my boat speed working.  I got to the layline out on the right and just stayed out in front of everyone.  For the 3rd race of the day I was in a close heat with Steve Barrett all the way around the course.  I followed him until I was able to pass him upwind on the final beat and led to the finish.

The RC tried to start a 4th race, but the Navy was out testing an RC submersible in the area and told us we had to vacate the area.  By then the breeze was nearing 20 which made for a fun ride in.  With a 3-1-1 it was a fun day on the water and nice to have some close, competitive racing with the Laser sailors at SMSA in preparation for the Crab Claw regatta at SSA next weekend.  I’ll miss the second day of the regatta while I sail in FBYC’s Laser Fall series tomorrow.