We visited friends sailing Albacore’s at Ware River Yacht Club’s Governor’s Cup regatta and got to see an absolutely beautiful sunset. There was a pretty Blue Jay sailboat anchored in front of the club that made for a great subject. This was my first time really using a new to me Nikon D300s that I had picked up a few weeks ago. Day 1 at the Virginia Governor’s Cup Regatta at Ware River Yacht Club.  We had 10 boats out and started the day in 6-8.  In the first two races I had good starts, picked the shifts right and led both races.  In the final leg of the 2nd race the sea breeze came in at 13-15 knots and we did two more races in that wind.  As I was out there hiking my butt off I realized I hadn’t sailed a single event this year in wind.  I just didn’t have the muscles for it and my results showed.  This was the wind for Henry Amthor and he put up two bullets in the final two races to take the overall lead today.  I made a bad decision to put in an extra tack in the final leg of the 3rd race and dropped to 3rd.  I managed a 2nd in the final race.  With 1-1-3-2 I’m just one point behind Henry in 2nd place and we’ll be sailing day two tomorrow. 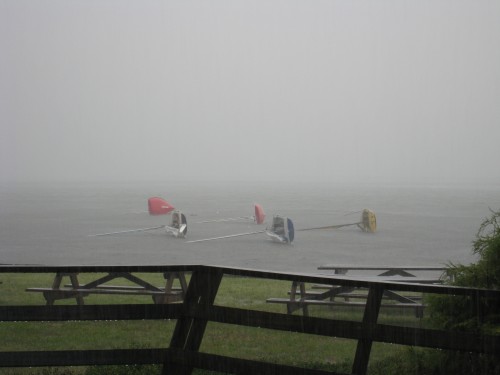 This is a photo of part of the aftermath of a microburst that came through the Ware River Yacht Club site shortly after all of the boats came in for the day on Saturday. These five Buccaneers were tipped while at anchor. About 30 other boats were tipped or thrown from their trailers or dollies. The tent city was nearly leveled by what was estimated to be at least 60-knot gusts for less than 5 minutes. There were no injuries and only minor damage to boats, tents and the club facilities.

Here’s an article about me at the Ware River Governor’s Cup Regatta winning the Congressman’s Cup:

This past weekend I was witness to an incredible performance by Jon Deutsch sailing in the laser fleet at the 43rd Annual Governors Cup. Not only did Jon win every single race to take first place, he was also recognized for his efforts off the racecourse by winning the Congressman’s Cup for outstanding sportsmanship. At the awards ceremony Jon was lauded for his efforts to help his fellow competitors sail better by helping them to improve the rigging of their boats.

On Saturday, Jon noticed that some sailors forgot their clew tie-downs which holds the clew of the sail to the end of the boom. Without a clew tie-down, the sail is less efficient and the boat goes slower. On Sunday, with properly rigged boats, the boast-speed of all the competitors was much more even and the racing was significantly more competitive.

The race management team took note of Jon’s efforts and selected him as the recipient of the award for sportsmanship out of the huge number of competitors in the Albacore, Hampton One Design, Buccaneer, Mobjack, Moth, Laser and handicap fleets. Compared to what Jon contributes to local Laser sailing through his efforts as District Chairman for Laser District 11 (covering Maryland, Virginia, West Virginia and Delaware) and as Laser Fleet captain at FBYC, his contribution to the Governors Cup Laser fleet was small, but it is great to see that they were so richly rewarded.