We had some nice weather and some wind for at least the first half of the Deep Creek Laser Invitational allowing us to get in 4 races on Saturday.  I put up a 3-1-1-2 and finished 1st in the 19-boat Standard fleet. Sunday we went out, spent 25 minutes sailing 2 legs and they abandoned and eventually sent us in without any races having not had any wind all day.

Saturday, we went out at 10:30 in partial fog for our 11am start.  After a brief postponement we got the first race underway.  I had a good start, winning the boat end, but my first two tacks weren’t so good and I found myself 8th at the windward mark.  From there I chipped away at boats and got to 3rd at the finish.

In the 2nd race I had another great start and just picked the shifts up the beat and got a nice lead. Darren Van Hutton and Meredith Hillyer, both on-the-lake sailors, both had great downwind speed and always seemed to catch up to me a bit.  Upwind I seemed to be able to pick the shifts right and would pull back ahead.  As we approached the last downwind mark with just a short beat left to the finish, there was a pontoon boat fishing just 5 feet upwind of the leeward mark.  To make matters worse, he had a line out to the right of the mark and he was reeling in ‘something big’ and was refusing to move.

I wound up having to sail 20 feet to the right of the mark to get around his fishing line and just as I was rounding the mark and the boat, I realized he had another line out the other way.  Only this one was in the air for about 40 feet so I couldn’t even attempt to sail over it.  I was really wishing I had a pocket knife with me.  The leader of the Radial fleet who was sailing a shorter course was right next to me with non of his competition in sight, and Meredith was about 10 lengths behind me with the rest of our fleet another 20 lengths behind her.  All 3 of us ended up having to sail about 40-50 feet on starboard on a close reach just to get to where the fishing line hit the water where we could pull our boards up and sneak over it.  Meredith almost caught up to me and I was able to stay about a boat length ahead of her at the finish.

For the 3rd race, I was going to try to win the boat again, but realized with about a minute and a half left to go that we were likely to get a big lefty at the start.  I made my way down to the pin where I was all alone except for one other boat.  At the gun I was able to tack onto port and built a pretty comfortable lead by the first mark.  By the top mark of the 2nd beat Meredith caught up a bit and rode a nice puff around the mark and downwind on the inside lane putting her just ahead of me.  Eventually that petered out and the wind filled back in from the outside and he angle allowed me to get back just ahead through the finish.

After a lunch break (where I filmed this cool time lapse of the fleet coming in) we went back out for one more race in the afternoon.  At the start it was clear that left was favored so most of the faster boats were starting there.  Right at the gun the wind went left which ended up rafting up 6 of us top of the pin.  We couldn’t tack out because the rest of the fleet was on starboard so we just each took our turn bouncing off the pin, sailing out to the left, doing our turn and heading upwind.  By then we were clear astern of most of the fleet.

I worked my way up the left and was about 4th at the windward mark.  The lead pack went wide on the downwind leg and sailed into a hole while I headed down the inside with Meredith, Daryl and Margaret Podlich just behind me.  They ended up reeling me in as they rode a puff down and just as Daryl and Margaret were passing me, Daryl death rolled.  Margaret had just enough of an overlap at the mark to take it and I wound up following just behind her the rest of the course to finish 2nd.

Sunday we were initially postponed on shore and they sent us out once the wind filled in a bit.  After chasing the wind around a few directions they set a course and started us.  I had a pretty abismal start, but picked some shifts up the middle of the course in 2 knots of wind to round the mark in 6th.  As we were at the top mark the wind was in transition and shifting about 100 degrees and a few minutes later the RC abandoned the race.  We sat on the course for 25 minutes waiting for the wind to settle down and the RC sent us in for lunch.  The wind never settled, so they never sent us back out and thus the regatta stood as is. 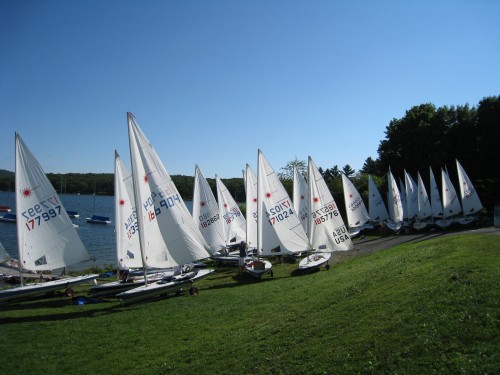