We didn’t expect as much wind as we got – in fact it was too much for the Flying Scots while 7 ILCA and 2 Melges 15 ventured out into winds in the mid-teens.

The first race was a very long one. I broke my tiller extension universal joint while sailing the first downwind leg. I had been in the lead and I lost a couple boats while I stopped to replace it. I was able to pass one of the boats that passed me to finish in 3rd.

The course was shortened significantly for the remaining races and it was a dead heat between myself and Reed. I would win 2 of the final 3, but his bullet in the first race and my 3rd was enough to give him a point advantage.

Had fun sailing with Reed, Len, Todd, Brad and Holly on what was a rare windy summer day. Thanks to Clark, Rick and crew for running the races.

Fishing Bay’s ILCA Fall Regatta started windy in the 12-15 knot range and gusty though not quite surfing conditions downwind. I focused on my starts and mostly had good starts towards the boat. As the day went on we eventually found 2 different winds on the course – a more lefty and gusty breeze in the middle of the river, and sometimes a much more right and sometimes puffy breeze on the right. The timing to go right was key, miss it and you were toast, hit it right and you were golden. Generally the left did ok until it didn’t. The closed start/finish line made the downwind legs more of a course and a little less tactical.

In the final race wind was down a bit, I was starting at the pin as i saw more wind to the left, only as the final minute counted down I could see the wind going even more left – so far that I would be able to port tack the fleet if I could just put some space between myself and David. I pulled the trigger just right and tacked ahead of him by 4-5 boat lengths and lead the rest of the way around. Also sailed with a closed start/finish line which meant sailing more of a course downwind rather than picking the optimal wind/wave direction.

It was great having some Annapolis sailors come join us – great practice for them on the waters of next weekends’ masters regatta.

We ended up with an awesome day of racing for Fishing Bay Yacht Club’s Laser Fall Regatta – it was fun sailing despite the drizzle most of the day. I ended up 4th after loosing the tiebreaker.

The drizzle was a blessing in disguise. It wet the tell tails causing them to stick to the sail all day long. Having not sailed the boat and being out of practice – I didn’t have a good feel for the boat and not having tell tales forced me to feel the boat and not rely on them.

The fleet we had was fantastic – everyone sailed well and was fun to sail with. The fleet was deep too – with a lot of passing in the top 10 in any given race. Evan H was great in his return to the Laser. Dave W was consistently just a little faster and always in the right spot on the critical first beat.

Several sailors from Severn Sailing Association made the trip and made a mini weekend out of it staying in town tonight and driving back to Annapolis in the morning. All of them are returning next weekend for the 39th Chesapeake Bay Laser Masters.

Bob F ran a great RC, the length of the line challenged us and he made adjustments as teh wind shifted a bit and got lighter. Clark and Jen were on point in the Parker.

The FBYC Fall Regatta started out with a late start due to some confusion over the race time.  In the morning the wind was blowing great – into the low 20’s as folks were arriving and those that would have sailed standard rigs all elected to switch down to the radials and join the juniors so we could sail in a single fleet with the same rig. All of the Flying Scots bailed on the day. By the time we had a race committee the wind had cracked off into the low teens – perfect standard-rig weather had we all not already decided to go Radial.

We finally got out to the race course for a 1pm start.  Unfortunately for Henry, he broke his gooseneck in the prestart dropping us down to 7 boats. I had a great start and sailed up the middle left of the course while Finn and Reed worked the right in better shifts and pressure. I was right behind Finn at the top mark with Reed behind me. By the 2nd upwind the wind had dropped to 10-11 and I really had to focus on staying in pressure. I managed to beat Finn to the top mark, but downwind he caught a puff and blew right by me.  At the finish Finn mistook the lap we were on and went for a rounding while I went across the finish line.

At the start of the 2nd race another boat flipped over and startled me when the top of the mast hit my deck just beside me.  I pushed off the mast to keep us from tangling and was able to go on and start relatively on time. In this 1-lap race I stayed right behind Finn the whole time finishing 2nd.

In the 3rd race I won the boat but was a bit slow upwind with the traveler looser than I would have liked. I tried to play the shifts to the left, but was mostly on the wrong side of the course letting Reed get around me and had to settle for a 3rd.

In the 4th race the left finally paid, except Britt went even more left and led us at the top mark. Chad was right behind us and gave Finn some trouble and I was able to get around Britt to win the race with Finn behind me and Chad behind him.

At the start of the 5th race Margaret had a fantastic start and was mixing it up with the leaders to begin the leg. After many days of practice, today was her first time racing.  I tried to bang the left again, but it didn’t work and I trailed Finn and Britt at the top mark.  This being an H course I was able to tack early on the upwind to lay the finish and just managed to beat out Britt for a 2nd.  Finn would go on to win the day by 2 points.

We had a ton of fun racing today. The wind held in most of the day. Finn, Reed, Chad, Britt and the rest of the fleet were all fun competitors to sail with and the race committee did a good job keeping our course square and getting us started. 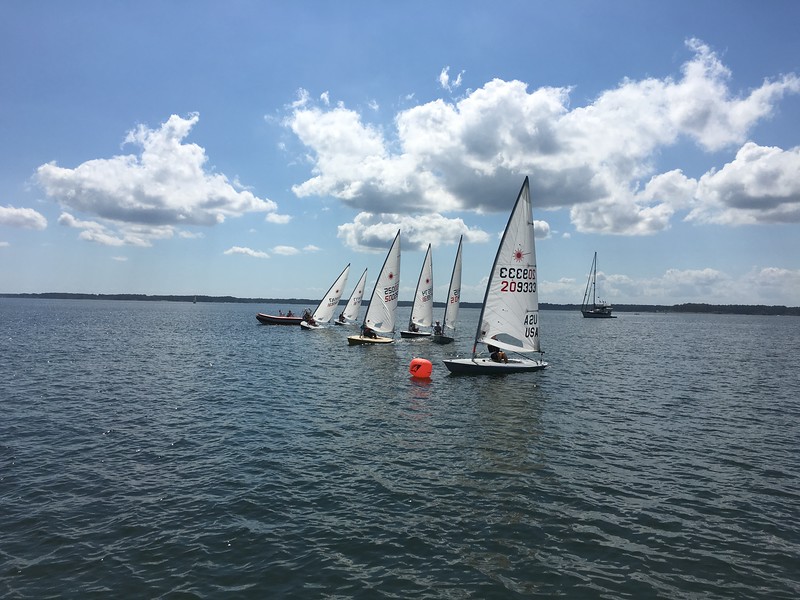 For the 2016 FBYC Laser Fall Regatta we took a novel approach to running the races: since it was nice weather and light winds and we had no RC helpers – 7 of us took out 6 Lasers and a RIB.  We then took turns on the RIB to run races and I jumped on the boat of whoever was on the RIB.  We did two cycles so everyone missed 2 races and we got in 14 races.

All in all it worked pretty well, everyone had fun and it was good racing. We did 7 races today in light wind for the Laser Fall Regatta at Fishing Bay Yacht Club.  I generally kept the boat moving and didn’t dig too far into any holes and maintained mostly top half finishes to end up 3rd overall. 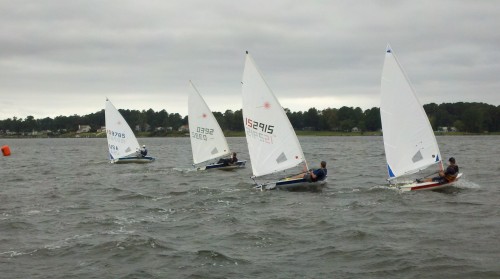 The weather for Sunday at Fishing Bay Yacht Club started out a little questionable.  The wind was blowing 20-25 out of the North at the buoy at the point.  There were 5 of us there to sail and we all decided to take radials out.  We raced inside Fishing Bay in winds in the teens and the Radial sails made for good close racing without any of us being over powered and having to fight the boat.

Ron Thompson and I traded for the lead throughout the races today.  Richard Biggs was not far behind pouncing on any mistakes we made.  With shifty winds in Fishing Bay there were plenty of passing lanes by picking the right shifts both upwind and down.

After 5 races in about 2 hours with off-and-on rain we called it day and retired to the clubhouse for chilli.  All-in-all it was a fun day of sailing and I had to work hard to finish 1-1-2-1-1.  I’m glad this weekend went how it did and I’m even more ready to head up to SSA next weekend for the Crab Claw regatta.