Sunday at the Stingray Point Regatta was even lighter than the day before. We thought we would be postponed out at the water to start the day, but there was around 4 knots and so we started.

With the course set towards the east, port tack took boats closer to Gwynn’s Island and any boat that went too far in that direction ended up becalmed over there. We were careful to pick the shifts and pressure often in the middle right of the course and later to the left when the current switched. We continued to work on our boat speed in light air and our crew maneuvers.

The second race ended up being shortened to 1 race. The wind went to just about nothing and luckily we had current pushing us down the course to the finish. There also was a good bit of power boat chop making it tough to keep the spinnaker full.

Despite the light outcome and not being a boat in a single race – it was still a fun event and we learned a lot more about the boat and how to make it go.

The first day of buoy racing for the Stingray Point Regatta at Fishing Bay Yacht Club brought light air and a combined A1/A2 start consisting of 11 boats (5 with us in A1). This was the first time buoy racing for Battle Rhythm and there was a bit to be learned about making the boat go upwind. We also got a lot better at spinnaker work having a full crew and plenty of opportunities to put the sail up.

We had a very tough fleet with 3 of the boats being light sport boats that we seldom ever even saw on the race course except shortly after the start. We never even came close to correcting over them. Had we been sailing with most of the boats we normally sail with in the A2 fleet, we’d be closer to finishing mid-fleet.

Current at the mouth of the Piankatank definitely played a factor given how light the winds were. At one point they were so light during the second race that it was shortened to just one lap. By the 3rd race the wind started picking up, we had a good start and we even got to sit on the rail for a time.

Post racing there was a great party and band at the club and it was great catching up with folks from other boats and others who just came for the party.

Labor Day Weekend started with the Stingray Point Regatta Stingray Light Distance Race. This was effectively a warm up for the 2 days of buoy racing on Saturday and Sunday. Only 1 other boat in our A1 fleet had arrived and was there to race and we were started with the A2 and B fleet.

At the start the wind was pretty light. We worked our way upwind and out into the bay. There was some current around the mouth of the Rappahannock as we were sailing to weather heading North. Once we rounded the entrance to the Rappahannock we headed south again and were able to put up a spinnaker in the light air and catch up to the boats just ahead of us. It was a very tight reach and only because it was so light were we able to run the spinnaker almost like a code 0. GOIN’ was the only other boat with a spinnaker up and they were just ahead of us. As we approached – we couldn’t go above them or we couldn’t carry the chute. We couldn’t go below them because we wouldn’t lay the mark. Eventually that didn’t matter when a barge went by and messed up the wind for both of us requiring us to pull the chute to the deck and go upwind for less than a minute to fetch the mark.

Though our competition finished well ahead of us, it was a good day for only having 5 of us aboard the boat. Nice light day and we didn’t make any big mistakes and actually got to do some upwind sailing. More racing tomorrow and we’re going to get A LOT more light air practice.

Saturday morning we helped Jess’ father put the power boat in the water. This would be the first weekend we truly got to use it without worrying about it taking on water. Jess and I took it out for a cruise to FBYC and then out to the racecourse at the mouth of the Piankatank to watch a start. Racing Pictures.

That evening we had a low country boil back at the river house for some neighbors and friends.

The rest of the weekend was spent helping around the house, paddle boarding, boat rides, crabbing and of course picking them afterward. FBYC launched a new website for the Stingray Point Regatta this week. It uses a lot of the things we learned from the 2010 Optimist Nationals website and should serve as a good platform for promoting and providing information about the event. The regatta takes place each Labor Day weekend in Deltaville, Virginia at Fishing Bay Yacht Club and is sailed mostly around buoy courses in 23-40+ foot boats. Check it out at http://stingraypointregatta.org 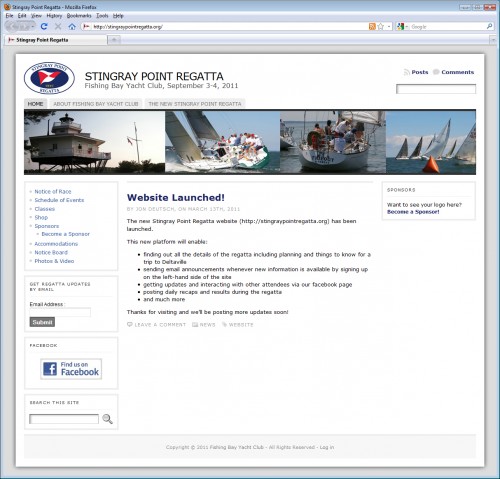