After the Snipe broke yesterday, Jess and I were without a plan for racing FBYC’s Open House Regatta on Saturday.  At 9pm Saturday night that plan came together and we would sail on Mad Hatter with the Flecks. This race is a progressive start distance race – meaning the slowest boast start first and the fastest boats start first and whoever finishes first wins.  This year featured a wide variety of boats including a 30′ trimaran and a Wasp. The weather was slightly overcast, warm with 12-14 knot winds.

We had a great start, hitting our time perfectly.  Only two of the legs were downwind for us, so that kept the spinnaker work for me up on the bow down to a minimum. We sailed the rhumb line and kept the boat going pretty well.  In the end the boat to beat was a 29er – who were able to fly a chute on the tight reaches much better than any of the other boats.  We finished 4th.

Following the race – we rafted up with a couple dozen other boats in Fishing Bay and got to hang out with everyone for a couple hours.  Later we took the boat back around to the dock and joined the dinner and listened to the band. 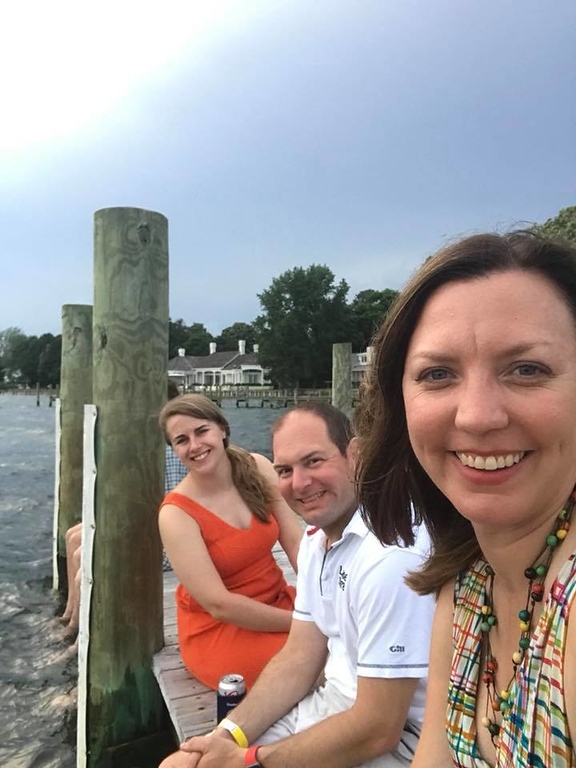 This year the Smith Point race was a bit of a slog with a 15-20 knot north wind.  I sailed on Mad Hatter and this year we didn’t make it to Smith Point light house until around 9:30.  But the spinnaker run all the way down the bay back to the Piankatank was quite nice.  Arriving at nearly 1am we were one of the last to finish, but still corrected over everyone else out there who sailed the long course.  Thanks again to Bob, Lisa and crew for having me along! This year for the Smith Point Race at Fishing Bay Yacht Club I sailed on an Olson 911S called Mad Hatter owned by Bob and Lisa Fleck.  We sailed in the PHRF-B fleet with close competition form a Tarten 40 and a Tarten 10.  The Smith Point Race is a 57nm race starting in the mouth of the Piankatank River heading east across the Chesapeake Bay then North to the the Smith Point Light house at the entrance of the Potomac River and then back to the Piankatank leaving Stingray Point to starboard.

We started out at 2pm with the race expected to take about 10-12 hours.  The forecast was for an east wind 12-18 all afternoon/evening with an outgoing tide starting shortly after the start.

On the leg across the bay we were close reaching and we stayed above everyone else in the fleet.  When the wind went a little south, this helped give us leverage to round in second – behind only Chilcoot from the A-fleet.  On the reach up the bay we were quickly run down by the J-105 Corryvreckan.  The short choppy and confused waves made the going a little tough. Towards the end of the leg to Smith point we had the chute up reaching and all of the bouncing around kept collapsing the chute.  We arrived at Smith Point just at sun down.

The way back in the dark was almost upwind and the wind slowly eased from 16 to about 12.  Halfway back I helmed and we did a sail change up to the No 1.  When we got to the Piankatank we turned west, put the chute up and finished the race as the 3rd boat over the line and 1st overall on corrected time by 10 minutes.  Results.