Couldn’t have ask for much better weather for yesterday’s Spring Laser Regatta at Corsica River Yacht Club.  The storms stayed away and we had a puffy 8-12 with temperatures in the 70’s and partly sunny skies.  We sailed just off Ship Point a short sail from the club.

In the first race I had  a great start at the boat and from there I just picked a couple shifts and was leading at the first windward mark by a few lengths.  I extended just a bit around the next lap and a half and got the win.

In the second race I was lining up for the start and with 10 seconds left I pulled the tiller toward me to put the bow down and go for the start and my tiller/extension universal joint snapped.  For years I’ve sailed with a Forespar extension for the very reason that it uses a screw-in speed lock universal joint that can be replaced very easily.  I keep a spare and a pair of pliers in my life-jacket, so 90 second repair later I was off and sailing.  I was able to catch up to the middle of the fleet and finished 7th.

In the 3rd race I had a good start, but caught a bad shift on the first beat and was 4th or 5th at the first mark.  Carten Faubel and Nicholas Place just got out ahead of everyone and stayed there for the race.  I slowly pass a couple boats and got up to 3rd.

For the 4th race I had another great start and just worked the shifts rounding the mark in first.  I held off Carsten on the first downwind and subsequent upwind, but he had been so fast all day and he got just ahead of me on the 2nd downwind.  On the last tack of final short beat the finish we dragged race and he got me by about 2 feet.

We started a 5th race in 6-8 knots as the wind began easing off, but a storm passed a little too close for comfort and the race committee abandoned it on the 3rd leg and sent us in.

With 1-7-3-2 I ended up 2nd behind Carsten and just ahead of Nicholas Place.  CRYC did another great job and it’s always a fun place to sail.  Thanks for putting on the regatta and having the Lasers! 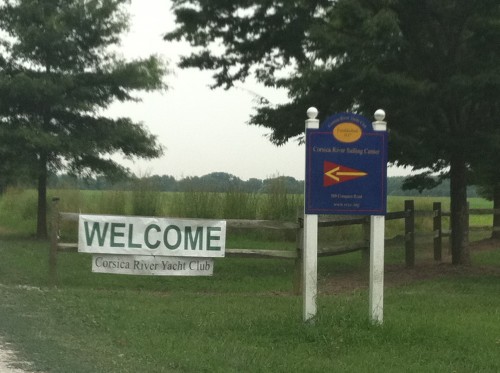 We had some pretty hot racing at the Corsica River Yacht Club Annual Regatta this weekend.  The 100+ degree temperatures might have scared off a few sailors, but those who came were rewarded with nice breezes and some pretty close racing.

I sailed in the 11-boat Laser Standard rig fleet and the wind started out pretty light as we sailed to the course.  Once on the course the wind filled in and while we were racing we saw everything from 5 to about 10. The racing was a lot of fun with 6 or 7 of us really mixing it up at the front of the fleet.  One of the keys to the day was not making any mistakes – all it would take is one little mistake and someone else would be there to capitalize on it.

My day went pretty well with a 6-1-2-1-6.  Two sixes might seem like that would put me out of contention, but the racing was so tight between myself, Nicholas Place, Holger Hinsch and Eric Reinke after 5 races that we actually in a 4-way tie for first.

Saturday evening CRYC had a blue-grass band playing in the pavilion while they put on dinner.  Camping in that heat was a little rough, but bearable thanks to a slight breeze.

On Sunday we had a little more wind than Saturday, but it was even shiftier.  I had a great start in the first race and just got out front and stayed there to win it.  That put me into 1st overall – 2 points ahead of Holger in 2nd. 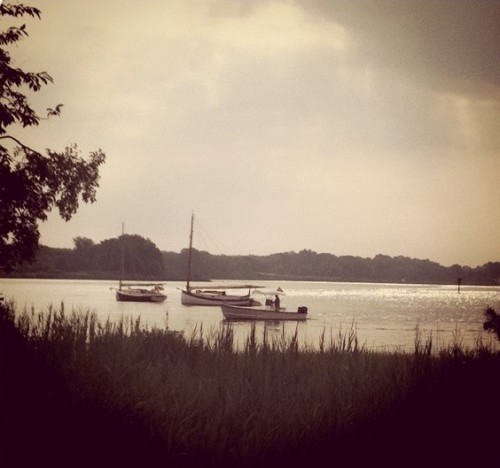 The second race was a bit more interesting.  I had an ok start, but got out to the right on the first beat which was not the place to be.  I managed to be 5th at the first mark and picked up a spot on the downwind.  Holger was leading the race at that point with Nicholas just behind him.  I knew if they beat me, I had to be right behind them or else they’d move ahead of me in the overall standings.  Holger, Nicholas and, 3rd place boat at the time, Mike Mays went out to the left in what looked like would be a parade.  I went somewhat left behind them but not as hard as they did.  The two boats just behind me went right and got a nice lift coming back and crossing ahead of me.  It looked like the wind would continue going right so I headed off that way.  It did and before I knew it I was on the layline and everyone who had gone left was way over stood.  So in the last half of the last beat I went from 6th to 1st to win the race and the regatta. 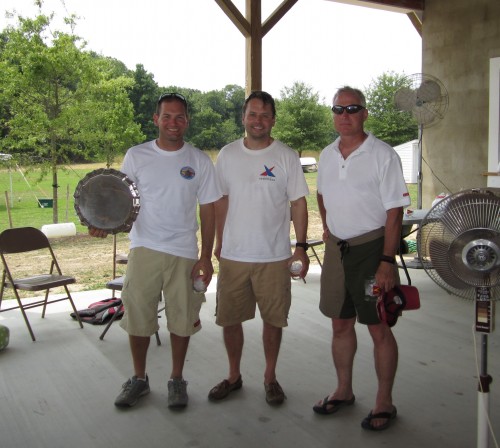 Now that my wrist is starting to heal a bit, it was fun putting some of the things I learned at the laser clinic a month ago into my racing. Corsica River Yacht Club put on another great regatta and I had a great time sailing there and meeting all of the people there. I’m looking forward to going back again especially now that I’ve got my name on one of the perpetual trophies.